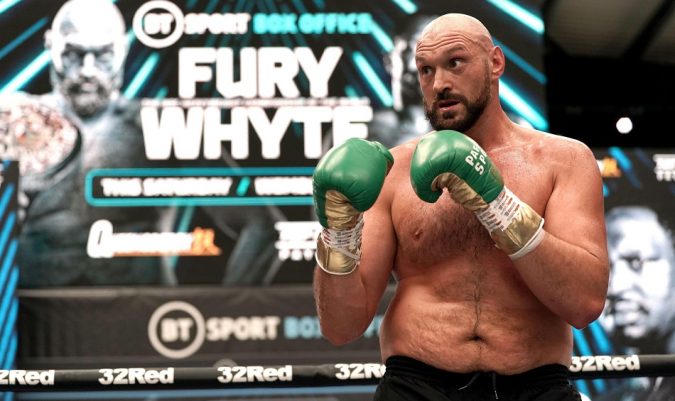 HEAVYWEIGHT SPECTACULAR: We have one of the biggest heavyweight clashes of the year on Saturday night as Tyson Fury and Dillian Whyte go toe-to-toe at Wembley! This is one of those fights when everyone has an opinion, and it’s always a special occasion to be honest! Our preview below with recommended BETDAQ bet.

Tyson Fury is a short odds favourite on BETDAQ BETTING EXCHANGE, but there will be a lot of punters out there who believe Whyte can win here. The odds at the time of writing currently trade; Tyson Fury 1.22, Dillian Whyte 5.9 and the draw is 50.0.

To fully understand this fight we have to go back to Wembley around this time in 2017. Anthony Joshua fought Wladimir Klitschko in front of 80,000 fans on the 29th of April, and that fight changed the face of British boxing. At that stage, Tyson Fury was out of boxing. He was sitting at home weighing over 30 stone and suffering from depression. A lot is made about the Anthony Joshua and Tyson Fury “rivalry” but you have to say it was Joshua who inspired Fury to come back into the ring. Fast forward to June 2018, and Fury was back in the ring against Sefer Seferi. He then went on to fight Francesco Pianeta but out of nowhere he got the call to fight Deontay Wilder at the end of the year.

So much has happened since, but it’s worth remembering what was going on at the time. Before Fury fought Wilder, which was a voluntary defence which is remarkable now when you think about how it changed Wilder’s career, Joshua and Whyte both wanted to fight Wilder. In 2018, Wilder was viewed as an “easy” target – he had big punching power but was absolutely terrible technically and most boxing fans said his CV was very light. He never fought anyone of real threat. At the time, there’s no doubt that team Wilder thought Fury was a soft touch – a chance to get a big name on his CV and move on.

What happened next is boxing history. Fury was absolutely incredible, and got back up when all looked lost for a draw. That was Wilder’s big chance, because as the ring rust left Fury and he got fitter, there was only ever going to be one winner. Fury in technically gifted – for such a big man he doesn’t move like a heavyweight and he is rightfully favourite for this bout.

However, for Fury fans there are reasons to be worried. Fury has only faced Wilder and basically nobody else – all his other fights were very soft touches, and how you rate Fury depends on how you rate Wilder. It’s important to note that everyone wanted the Wilder fight in 2018 because they thought he was technically poor. In that sense, this fight is a bigger test for Fury. Whyte has the power to knock Fury out, and he has been involved in some massive fights himself.

The real question is, and what makes this fight so interesting, is can Whyte land the knockout punch? In all likelihood, the answer to that is no. Fury is very difficult to hit, and Whyte isn’t even close to Fury from a technical point of view. Whyte has been out boxed in plenty of fights before coming through with a KO – the issue here is Fury doesn’t get hit often. Whyte will have to be very aggressive, and that will likely cause him problems as it did for Wilder.

On balance, the odds of 1.22 on Fury do look a little short. However, the more interesting market here is the method of victory market. Despite knocking out Wilder, Fury has never been known as a big puncher. He will be dangerous in this fight because Whyte will have to chase after him and take chances, but there is value in the method of victory market. Fury will know that he doesn’t have to chase a knockout here – he is exceptionally smart when it comes to tactics in the ring – and he will know that he can easily out box Whyte.

From that point of view, the 3.25 or bigger on Fury to win by decision or technical decision looks very good value – you might even get bigger closer to fight time. The big danger is as the fight goes on and Whyte realises he needs a knockout, he will take more and more chances. However, Whyte is a much bigger man than Wilder and Fury might not have the power to land a big punch – if Whyte is knocked out it will likely be through a collection of punches but the Fury tactics will be to out box Whyte which makes Fury on points a very appealing bet. What a fight in store!

Recommended Bet:
Tyson Fury to win by Decision or Technical Decision at 3.25 or bigger.