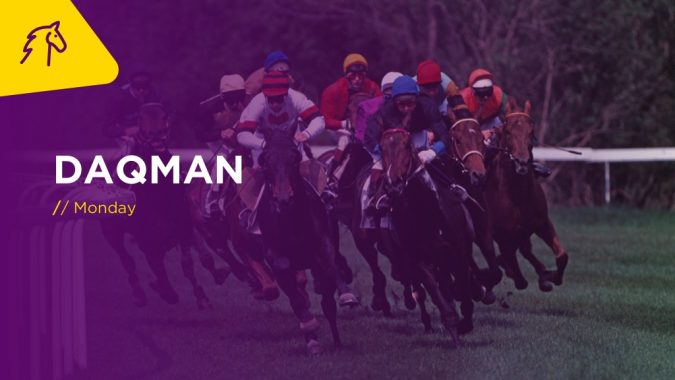 33-1 E.W. GUINEAS BET WAS PROSPEROUS: Daqman, who had the 1-2-3 in his four-horse verdict on the 2,000 Guineas, was agonisingly close in the 1,000 Guineas yesterday, second and third but within a neck of a 33-1 strike with an each-way BETDAQ bet which was closing down the leader to the line. He had the winner (Cachet 16-1) and third in his draw assessment and opposed the favourite, Tenebrism, eighth at 11-4.

DERBY AND OAKS TRIALS START THIS WEEK: Read today’s Guineas wrap, and look out for tomorrow’s launch of Fortune Cookies for the Flat. The big meetings of the week at Chester (Wednesday-Friday) and Lingfield (Saturday) have Derby and Oaks trials.

⭕ 2,000 Guineas Coreobus comes out an unblemished winner of the first colts’ Classic, setting his sights on the St James’s Palace Stakes at Royal Ascot and the champion mile races later on.

Native Trail was all front legs, prancing and pounding at the firm ground. His action will be much better suited to an easier surface for the Irish 2,000.

Luxembourg will head straight to the Derby after an uncomfortable race at Newmarket, clipping heels early on (may have sustained a cut) and racing alone on the far rail at the business end of the race.

⭕ 1,000 Guineas James Doyle, who rode Coroebus (Charlie Appleby), completed the Guineas double for a different trainer, when nothing would take him on in his expert make-all on Cachet (George Boughey).

Prosperous Voyage would have caught him in a few more yards, and is yet another feather in the already heavily bedecked cap of Ralph Beckett, as one of the the top trainers of fillies since the heydays of Henry Cecil and Sir Michael Stoute.

It was not easy to back Cachet after the second filly home to her Nell Gwyn success, Almohandesah, was only fourth in a Listed on Saturday (the third home in the Nell Gwyn was 11th yesterday!)

Tenebrism was only eighth but stablemate Tuesday, who had come on well in her quarters but still looked weak in her neck, and green in the race, responded well when ridden two out and seems to be a mile-and-a-quarter animal.

Finest View is set to start favourite in the opener for Alan King but the trainer’s recent form has a question mark (1 winner from last 23).

Finest View’s form was progressive last season with her getting off the mark on her final start at Ludlow last month but that came with some juice in the ground and the going at Kempton today is good with the sun out this morning.

The mare has a couple of potentially progressive runners to deal with who have shaped well in their opening races.

Galahad Threepwood had consistent form on the flat when trained by Mick Channon and shaped with promise on his first hurdles start for Ben Pauling when third at Newcastle. That was a good effort and Pauling is in good form with 4 winners from his last 14 runners. He can add to that strike-rate here.

Carn A Chlamain also seems to have translated his flat form to hurdles judged by his opening win at Southwell last month when beating the odds-on Salsada. The value of the form is questionable and Carn A Chlamain was notably weak in early exchanges.

⭕ 1.45 Curragh Blackbeard can continue the excellent form of the Ballydoyle juveniles and land this Listed event.

He was green on debut when winning at Dundalk but saw off the favourite Alexis Zorba comfortably enough and the pair finished well clear.

He might prove too strong for Cork winner Crispy Cat who got the job done well on debut.

⭕ 4.05 Curragh (Mooresbridge Stakes, Group 2) Layfayette goes in search of a rapid early season hat-trick and takes another step up class after his Listed race win in Naas and then in the Group 3 Alleged Stakes at the Curragh last time out where he finished a length and a quarter ahead of High Definition who bids to turn that form around.

A danger to both could come from Cadillac who is the best horse in the field ,if the official ratings can be believed. He was a Group 2 winner as a two-year-old and should have come on plenty for his reappearance run in a Listed event at Leopardstown.

Licence’s form ties in with Layfayette’s Naas win. He was only beaten half a length in that race and being the more progressive of the pair could easily turn that around.