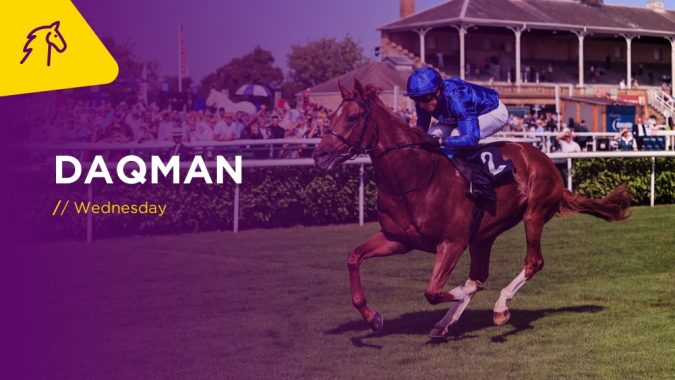 19.0 FALCON FLIES HOME FOR DAQMAN: ‘Falcon can swoop for Frankie’ and ‘Kyrios is king of the stayers.’ That’s how Daqman headlined a winning outsider for 50 points at 19.0 on BETDAQ and a nap to go with it yesterday. A glorious start to the Goodwood meeting.

Daqman 34 winners in July
Daqman 39, Pricewise 25 in the value challenge

⭕ 1.50 Goodwood This 1m 4f class-2 handicap went seven years out of nine to low numbers (2, 4, 5 and 6) taking advantage of a rails draw, though two of the last three seasons rear runners have scored from double-figure stalls.

Secret State (out of 2 today) has railed to victory round Chester, on the turn almost all the way; he has to do it right-handed here but Ascot was no bother – he showed big improvement, in fact – in the King George V Handicap.

That handed him the hat-trick and he has to give weight all round today, though just a pound in front of Maksud who didn’t seem to like the firm ground when only fifth in another Royal Ascot race.

Richard Hannon saddled six more losers on the opening day but Mugader put in the kind of power finish last time out which would just about get him home in this, if the pace is good and he can remain a beacon of the two camps near Marlborough.

The best collateral form may be Teumessias Fox’s two-and-a-half-lengths sixth to Secret State in that race – just in front of Surrey Mist – before being beaten by Soulcombe at Ascot in July; that puts them all about level!

Primo Bacio (4) drops down to a Group 3 for the first time since fourth to Alcohol Free in the Fred Darling last Spring; she won a Listed in her very next race but has spent her time in Groups 1 and 2 since.

Oscula beat Honey Sweet in a Carlisle Listed in June and just failed to hold off Jumbly at today’s level on Saturday. Surely, this comes too quickly.

Frankie Dettori picked up a nice spare for me yesterday and is back on my Christmas-card list. His mount, Samahram is the potential improver here, and the stats suggest he has the right stall in 5.

But 17 horses over 7f going round the Goodwood bend? It could be chaos; the new cutaway has only made them dive to the right.
Betdaq Betting Exchange value 9.9 Samahram

⭕ 3.00 Goodwood (Molecomb Stakes) Curragh trainer Michael O’Callaghan, who brought over Steel Bull to win this race under Colin Keane (2020), has booked another champion jockey, Ryan Moore, for Studio City, who made all and soon went clear at Navan three weeks or so back.

He’s worth a bet to overtake the exposed pair, Rocket Rodney and Eddie’s Boy, who were second and third in the Windsor Castle Stakes. Rocket Rodney extended his lead over Eddie when they met again at Sandown.

Walbank was runner-up in the Norfolk Stakes and I can’t see how he warrants being 2lb up on Eddie’s Boy in the official ratings.

In the Vintage Stakes yesterday, Galeron failed to uphold the form of his win over Trillium here at Goodwood in June and, all told, trainer Richard Hannon had six losers in a row on the opening day of Goodwood.

But Andrew Balding, who won this last year with Alcohol Free, was determined to prove that she’s fast, too, dropping her back to the 6f of the July Cup for her fourth Group-1 victory.

She was nearly six lengths behind Baaeed in the Lockinge Stakes in May but is ‘twice the horse she was in the Spring,’ says Balding.

Order of Australia was a similar distance behind Baaeed in the Queen Anne at Royal Ascot and not likely to improve, aged five.

As we saw in the King George, the world-beaters can be beaten; on a bad day, on a fluke, on tactics. This looks clear cut as the 1.18 offers about Baaeed suggest!

Order Of Australia sets the pace; Baaeed bursts through. But, if Alcohol Free is in sight of her second Sussex at 13.5 on BETDAQ, you will feel the frisson for your pound.

You won’t begrudge Baaeed winning for a return of 18p, and you could be home Free. Or take 10.0 each way Alcohol Free, which pays 2.25 the place.

⭕ 6.40 Galway (Galway Plate) Preview stats appeared on Monday.
Henry De Bromhead (2015 and 2017) won this before the days of Rachael Blackmore, who has scored four times on his tasty Gin On Lime.

Gordon Elliott has won the Plate three times (2016, 2018 and 2019) with three different jockeys and, of the trio who ride for him today, only Davy Russell has won it before.

But the Westerner seven-year-old Fire Attack appeals to me as one just filling his potential.

⭕ 8.00 Sandown Arclight is well overpriced at BETDAQ offers of 13.0, with Sir Mark Prescott on a roll, striking at better than 50%.

With her main rival, Danza Della Luna, a nonner, she has the advantage of a low draw and a decent pitch in the handicap. This is her pick of three engagements this week.