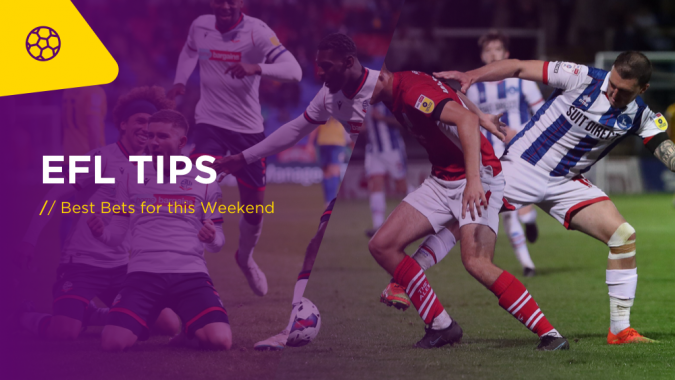 EFL TIPS: There’s plenty of action-packed fixtures across League One and League Two to get suck into this weekend and we unpack the best bets across both leagues below.

We begin the weekend’s action by diving into Sheffield Wednesday against Wycombe Wanderers. The game will kick off at Hillsborough Stadium, where home fans will be excited to get back into the action following last weekend’s League game draw against Ipswich Town, who are top of the table. Sheffield Wednesday aren’t far behind, currently sitting fourth, having won four of their last five league outings. If they have lacked anything, it certainly hasn’t been goals this season, having netted 17 from their nine games played.

Their opponents Wycombe however are slightly lacking in that area, having only scored 12 with a goal difference of 0. This should shape up to be a comfortable win for Sheffield Wednesday, and we make them our value bet at 1.64.

This top-of-the-table matchup between Plymouth Argyle and Ipswich Town should be a cracker. With both teams in superb form at this early stage in the season, the win is there for the taking. Plymouth Argle have won four from their last five in the league, with the other being a draw from last weekend against Portsmouth. Their top form has led to them currently being ranked third in the table ahead of this weekend’s fixtures. Ipswich Town have also had a dream start to the season, sitting on top of the leader board with no defeats so far. Things may change at Home Park however, where Plymouth Argle fans will be out in full force. Our value bet here will be laying Ipswich Town at 2.28.

We have another top-of-the-table matchup in League Two, where first and second place in the table Barrow and Leyton Orient duke it out for the top spot. A win here for Barrow wouldn’t put them ahead, as Leyton Orient are clear by four points, however it would certainly help close the gap. The home side will head into this game full of confidence having won their last two matches, marking their fifth win from their last six league fixtures. In their most recent outing, Josh Gordon was instrumental in achieving the win for Barrow, and fans will be keen to see if he can top his two goals from last game while in front of home spectators this weekend.

Leyton Orient on the other hand are actually undefeated this season so far, having only conceded four goals in total. Their defensive and offensive prowess is hard to ignore, which makes it surprising that they head into this match the underdogs at 2.8, which our analysis shows to be the value bet for this game.

For our final tip, we head down to Valley Parade for what should also be a highly entertaining fixture featuring Bradford City and AFC Wimbledon. Home side Bradford City seem like likely victors in this game after a flying start to the season which has seen them win four of their last five league games. They sit comfortably at fifth in the table, with 17 points from nine games and having netted a total of 14 goals.

AFC Wimbledon will be slightly less enthusiastic about their start to the season however, having lost four of their last five games and only having netted nine, leaving them 17th in the table. Fans may not be expecting a win here, and unfortunately we have to agree with them, with our value bet being to back Bradford City at 1.86.

EFL TIPS: A Pair Of Top Of The Table Clashes

WEEK AHEAD: NFL, Nations League And The Presidents Cup