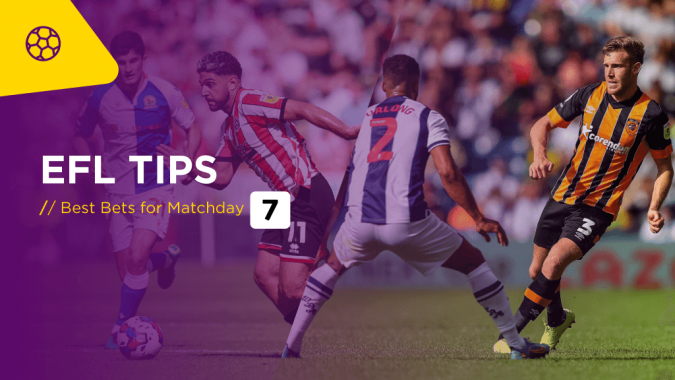 EFL TIPS: We’re flying through the fixtures, and match day seven is already upon us! There are some very fiery match ups to enjoy this weekend, and we preview the best of the action across the Championship, League One and League two, with our value bets below.

Sheffield United are sitting comfortably at the top of the table, having won three of their last four games, and that streak doesn’t look likely to change heading into this weekend. In Sheffield United’s last two outings to the MKM Stadium they scored three goals in each fixture and won both times. Moreover, they are on top form currently having a goal difference of nine so far, miles ahead of the rest of the league. It’s fair to say The Tigers will have to pull off a stunning performance at their home ground to come away with a taste of victory. Their loss to QPR may also have a mental impact on their performance. With all of this in mind, it seems a safe bet to be backing Sheffield United at 1.8, which seems a fair price considering both teams current and past form.

Yet another tantalising game for football fans, regardless of your loyalties this is going to be an unmissable match-up. Bristol City have had a quiet yet confident start to the season, ranking seventh in the table and boasting three wins from their last five matches, with the other two being draws. Blackburn have lost to Bristol in their last four league games but they did manage to hold off Blackpool after a 16th minute goal earlier this week, leaving them fifth in the table just two spots ahead of their opponents this weekend. Losing is not an option for Jon Dahl Tomasson’s side this weekend as giving up three points would put Bristol ahead of them in the table. Either way this match plays out it will be an action-packed game, and our analysis backs Bristol at 3.3 despite them being the underdogs.

Accrington Stanley are sitting at 11th in the table following three consecutive draws in the league. Their fans will be hoping for an end to the deadlock at their home stadium this weekend. They face tough competition in Ipswich Town who have had a dominant start to the season, really putting their mark on the table thus far and they currently sit second, neck and neck with Portsmouth. The Blue’s will be rearing to net some goals and increase that goal difference that they are currently tied with Portsmouth for. They are yet to be defeated so far this season, having won four fixtures, and drawn the other two. Conor Chaplin will be one to keep an eye on, having scored in both the clubs last two fixtures. Our bet here is backing Ipswich Town at 1.8, as they will be looking to extend their dominant start to the season.

We round things off by taking a look at League Two with a battle at the top of the table between Northampton Town and Barrow. Northampton will be hosting the away side at the Sixfields Stadium. Jon Brady’s side have had a mixed start to the season with their first loss of 1-0 to Doncaster last weekend, but not all hope is lost yet. They rank sixth in the table and will be looking to impress in front of the home crowd this Saturday. Barrow are looking on the up however, currently sitting second in the table and having won five of their six matches thus far. They will need to tighten up their defence while still playing some aggressive football to keep the scores ticking over. Our value bet ahead of this key fixture is backing Northampton Town at 2.05 with the home advantage on their side.