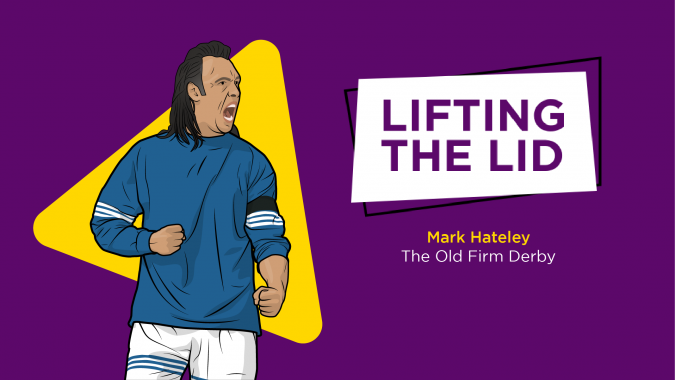 LIFTING THE LID: Sunday sees Rangers and Celtic clash at Ibrox in the Old Firm Derby, so we caught up with Mark Hateley to lift the lid on one of football’s biggest rivalries.

“Playing in the Old Firm derby is different to any other match I’ve ever played in.”

Ahead of the next instalment of the Old Firm derby this Sunday, Rangers legend Mark Hateley is recalling his memories of what it was like to play in one of the biggest derbies in world football.

“It was completely alien to anything else I had ever played in throughout my whole career, and I played in some big derbies,” Hateley tells BETDAQ. “Portsmouth v Southampton, obviously the Milan derby and then Monaco v Nice and Monaco v Marseille. But this one was crash, bang, wallop.”

Hateley joined Rangers from Monaco in 1990, and despite also having played for a European heavyweight the size of AC Milan, nothing had prepared him for the experience he was set to encounter in Scotland when his first Old Firm derby came around.

“The Milan derby was more strategic,” Hateley says. “The animosity was there between the two sets of supporters because the Milan supporters do hate each other, but there was still a game plan. You did your normal job that you were trained to do, which covered the majority of Italian football. You went into the game with a certain set-up to play against the opposition.

“Whereas the Old Firm game was hectic. Certain rules went out of the window, certain patterns of play went out the window. Especially if in the first 15 minutes where, if the ball ever did drop in midfield, nobody put their foot on the ball. It was looped over the top of the centre-halves to get everyone turning around and running towards the Celtic goal. That was the first 15 minutes of most Old Firm games, whether we were playing home or away.”

Hateley adds: “I was warned by the local players when I arrived at the club, a certain Ian Ferguson told me that I wouldn’t remember the first two games, they will go that quickly, and they did. I could never remember much about the game, it was at 100 miles per hour, sleeves up, balls over the top and it was just an out-and-out whirlwind of a game. The atmosphere between the two clubs would get you up and get you going.”

While the action on the pitch was always chaotic on match day, in the week building up to the next Old Firm derby, Hateley says Glasgow was always an electric place to be as the city’s two rivals prepared to do battle once more.

“You could always feel the atmosphere in Glasgow leading up to the game,” Hateley recalls. “Fans would come up to you if you were out and about, talking to you and trying to motivate you, but obviously there was no need for that. All the papers up in Glasgow were looking for the big story too – a controversial statement, a slip-up from a player saying something. It was a massive build-up.”

Luckily for Hateley, the Old Firm derby was often a happy hunting ground. Rangers were the dominant force during his time in Glasgow, with the club winning five Scottish league titles

during his initial five-year spell at Ibrox, while he even played his part as the Gers defeated Celtic in the 1990 Scottish League Cup final.

After leaving in 1995, Hateley re-signed for the club towards the end of the 1996/97 season and helped them win another title – a record-equalling ninth Scottish league title in a row for Rangers.

“You always like beating your biggest rivals. I did pretty well in the majority of them, though I was sent off two or three times! I played in one game where we had three players sent off, such was the feistiness of this fixture,” Hateley says.

“But back then, Celtic weren’t our biggest challengers, Aberdeen were. They were right up there. Back then we were beating everybody, which we did a lot of, hence the fact that we won nine titles on the trot. We were totally dominant and during my five-and-a-half, six seasons, I won 11 out of 15 available trophies. That’s how great our dominance was.”

As for Hateley’s fondest Old Firm memory, it was upon his return to Ibrox for his second spell when Rangers manager Walter Smith signed him just days before facing Celtic, with his injury-hit squad in need of a striker. Rangers won the game 1–0 as they closed in on that historic ninth straight title, though Hateley was also sent off for allegedly headbutting Stewart Kerr.

“My best memory of the Old Firm was going back for the ninth title,” he says. “We were struggling with players, I signed on the Thursday and was playing on the Saturday. I got a rush of emotions going back up there, as I always said I wanted to finish my career playing at Rangers. I got a call when I was at QPR, I wasn’t enjoying my football, and they said, ‘can you get up the road and we will sign you until the end of the season? We need you for the Old Firm game’. That was a big moment for me to get back and I had a great response from the supporters.

“It was a huge disappointment being sent off after splitting up a fight between Malky Mackay and Brian Laudrup. I thought I’d let the side down. But at that moment, the fans rallied round, the lads rolled their sleeves up and we held onto the 1-0 win that day, when we were getting a bit of a battering. It was quite an emotional day for me that day, going back, getting sent off, winning the game. It was a rollercoaster.

“So that’s my biggest memory. I scored a goal in 57 seconds at Parkhead, but the memory of that ninth title coming Rangers’ way by winning that game will always outweigh a personal achievement for me.”

Hateley etched his name into Rangers folklore after scoring 112 goals in 218 appearances for the club and developed a great relationship with the fans through his Old Firm heroics.

“My best memories were also enjoying the night after!” he says. “We had a really close bond with our set of supporters. The guys in my team used to visit supporters’ clubs most weekends, so we had an understanding of the depth of the feelings of supporters. If you lose an Old Firm game, they will all get tortured at work for a week or so, or until the next

Old Firm game, so winning the game means that they get the bragging rights and they have a smile on their face.

And it’s this relationship with the fans that Hateley believes makes the Old Firm derby such a special fixture in world football.