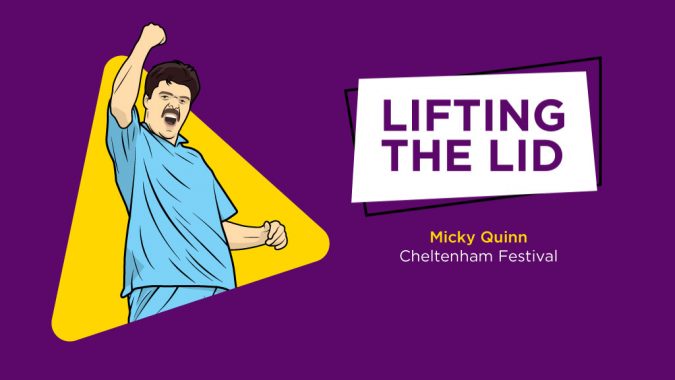 LIFTING THE LID: Footballer turned horse racing trainer Micky Quinn shares his Cheltenham memories ahead of The Festival next week

“The buzz at Cheltenham Festival, there’s nothing else like it.”

Former Newcastle and Coventry striker Micky Quinn is reminiscing about his favourite memories from Prestbury Park down the years.

“I really got into going as a footballer, it was a pilgrimage,” he tells BETDAQ. “Footballers’ Day was every Wednesday, I remember flying down from Newcastle once to have a Wednesday there! It was handy when I played for Coventry because I wasn’t too far away, and I discovered Black Velvet there, which is Guinness with a champagne top – a very acquired taste… I’ve met some fantastic people there too. It was something to look forward to, something to set the calendar by.”

Quinn should know more than most footballers about the magic of Cheltenham Festival, having made the rare crossover from a player to horse racing trainer after hanging up his playing boots.

A 25-year career in the horse racing world for Quinn commenced back in 1997, with his former Portsmouth team-mate Mick Channon – another to make the move from footballer to horse racing trainer – being responsible for the transition.

“Once I started playing professional football I met Mick,” Quinn recalls. “He was at Portsmouth coming to the end of his career and said he was starting training and would I get a half-share in a horse with him, which I did. My first horse with Mick was called Lanson and then I just got the bug. Every summer in between playing, I’d go down and muck my own horses out and get more and more involved. Towards the end of my career I just wanted to emulate Mick. He was my mentor and he’s the person responsible for probably costing me my life savings going into training!”

But while Quinn went on to become a successful Flat trainer, the jumps racing of the Cheltenham Festival has always been the pinnacle of the racing calendar for him.

“As a racing fan growing up, Cheltenham was the be all and end all,” he says. “The excitement there, people want to enjoy themselves – that’s what you find when you go to Cheltenham. They’re looking at fantastic race horses as well. There’s stories about the Irish coming over on the boat and doing their brains in and doing all their dough by the time they get to Cheltenham! It’s a fantastic meeting and there’s lot and lots of memories.”

Memories of Cheltenham Festival are something Quinn has in abundance.

“The one standout memory for me, it’s a great memory and a sad memory at the same time…” Quinn says. “As sadly my brother, he died at the age of 25, but when I was at Coventry we had a fantastic day out there. He wasn’t really into the racing side of it, but he liked a bet like myself. He was with his girlfriend so I said, ‘let’s go down to the last’ and it was the Queen Mother Champion Chase. I think it was Viking Flagship with Adrian Maguire, Travado…

“I took him down to the last fence and we’d backed Viking Flagship. Three horses jumped the last abreast and it was an exciting run. We were behind them going up to the winning line and then we saw Viking Flagship had won. Of course we celebrated, we won a right few quid that day. I always remember going to the different places, showing him everything. He absolutely loved it and it’s a wonderful memory to look back on.”

Quinn adds: “As for other memories, I went there once with Mick Harford. We won a few quid and then afterwards we went to see a gig in Wolverhampton. We ended up on some balcony. Mick had had a few and he was screaming, he wanted to get on the stage and was trying to jump over the balcony to get on stage – it was about a 20-foot drop! The bouncers weren’t too happy and said if he did it again he’d be escorted out!

“One year I was there with Alan Brazil doing radio. As soon as we finished on talkSPORT at 10am, he knew the fella in the Guinness tent, who was going to let us in at exactly one second past 10am! A magnificent meeting, fantastic racing, a great social side and lots of memories down the years.”

Quinn’s racing memories during his playing days weren’t just exclusive to Cheltenham Festival, with the striker and a few like-minded horse racing loving team-mates finding plenty of ways to keep themselves occupied once training had finished.

“At every club you had the snooker players, the golfers, you had the drinkers and then the gamblers…” he recalls. “We used to go to the bookies in the afternoon and have a day there. I wasn’t a massive gambler in the way of stakes, but it added up! We’d go a couple of times a week – it was a social thing.”

Quinn adds: “At Oldham, myself, Mark Ward, Andy Goram and Darron McDonough, we were the racing part of that team. We’d been invited to a box up at Haydock one day. Joe Royle, who was Oldham manager at the time, knew something was up so he gave us extra work in training and kept us behind. You’ve never seen four lads go for a shower so quick afterwards!

“I had an old white Ford Granada, which was nicknamed ‘The Ambulance’. We were waiting on Wardy, waiting to leave to get to Haydock for the first. He runs down to the car and gets in but as I pull away he’s not shut his door, so the door catches the lamp post. Wardy is pulling the door back on with his hands and had to hold the door all the way to Haydock from Oldham! Anyway, I got them there and we made the first.”

Quinn’s career as a horse racing trainer saw him train close to 200 winners over 25 years, recording 15 wins in both 2005 and 2008. However, the 59-year-old decided to call time on his training career earlier this year after his string was reduced to just two horses.

“When you’re only left with two or three horses and have rent to pay, wages to pay, the decision is taken out of your hands,” Quinn says. “I didn’t want to go into debt. It’s running a business, so I had to take a step back from it. I was gutted as I loved the day-to-day side of it with the horses.”

Having been a Flat trainer, Quinn never made it to Cheltenham Festival with one of his own horses, though did come close with Pink Sheets last year after winning a Listed mares’ novice hurdle at Newbury in November 2020, only for fate to cruelly intervene.

“I was so close last year to having a runner at Cheltenham,” he says. “We had a jumper called Pink Sheets and she just kept improving and improving. She won four on the spin, she won at Newbury and the next step was the novice mares’ race at Cheltenham which we were going to go for. But sadly, she picked up a freak injury and we had to retire, which I was gutted about as it would have been my first Cheltenham Festival runner and she would have gone there with a live chance.

“We were just scraping the surface with her, the way she was improving, and she was a slick jumper as well. She’s now in foal to Nathaniel so she’ll hopefully throw up a fantastic racehorse. That was the closest I got to Cheltenham. I’d love to have a Cheltenham runner, that was my ambition for the National Hunt. That would have been a great opportunity.”

While Quinn is now focused on media work amongst other commitments, he hasn’t ruled out a return to the racing world or put an end to his Cheltenham dream just yet.

“You never say never in racing, but I don’t think I could go back and start up independently again,” he says. “If I was going to be a trainer, it would be for an owner that had a set-up and the infrastructure in place so I could just go in and take over. Financially I couldn’t start from scratch and accumulate horses, so that would be the only way back in.

“If an owner had 25 hoses and his own place and he was on the same wavelength as me, same ambition, excitement, passion, then I’d go back in. I’m too passionate about the sport to cut my ties, but I’ve got back into my media work and am pretty busy, which is great. I’m just stepping back, but if there is an opportunity to get back into racing via training or managing horses then I’ll take it.”