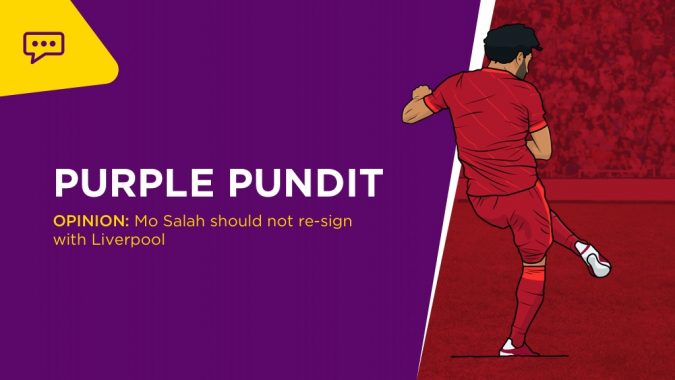 OPINION: Why Mo Salah should reject a new deal at Liverpool and move on instead.

Mo Salah is heading into the conclusion of this season with a lot more than a potential quadruple on his mind, as the Egyptian star is yet to renew his Liverpool contract. The former Chelsea attacker’s current deal expires in the summer of 2023, meaning should he not re-sign, he will either have to be sold in the next 12 months or be allowed to leave for free. Neither scenario is ideal for Jurgen Klopp, as despite Salah’s immense talent and record-breaking performances over the last number of years, it will be difficult to command a value that matches his worth given he turns 30 this summer and is on the verge of free agency.

But putting Liverpool’s aspirations to one side – what is the best move for Mo Salah? Whether The Reds can cap this season off with more silverware or not, the best decision Salah could make for himself is to say goodbye to the Anfield faithful and leave for pastures new.

At the outset, this may be an absurd suggestion, given the club’s ongoing chase for an unprecedented quadruple, but you need to look at this through the lens of Mo Salah and nothing more. First off, the former Roma and Fiorentina man has already helped guide Liverpool to their first league title in over 30 years and their sixth Champions League triumph. Outside of the domestic cups, whose significance is diminishing with every passing year, he has little if nothing left to achieve on Merseyside. Aside from winning them both in the same season, would a second league title or another European success add to Salah’s legacy? Should he win either or even both competitions this season then there’s all the more reason to seek out a new challenge.

Furthermore, the chasing pack of Chelsea, Spurs, Arsenal and Manchester United will arguably be at their strongest since Salah returned to England in this forthcoming season. Current Champions League holders Chelsea would be crazy to let Thomas Tuchel leave given his consistency in cup competitions and solid performances in the league. Spurs have gone from also-rans to top four favourites, and provided they do the right business in the summer, will have former Premier League champion Antonio Conte at the helm for his first full season in charge, with his sights firmly set on the top.

Arsenal may fall short of a Champions League berth this season, but they continue to impress under Mikel Arteta, and it could be argued that they are one prolific striker away from pushing up the table themselves. Lastly, with the imminent arrival of Erik ten Hag on the horizon, Manchester United should in theory have a settled, top-quality manager in situ for the first time in years, and they’ll be playing without the strain of Champions League football. Bringing all of that together, it could be more difficult than ever for Salah to win the Premier League, Champions League or domestic cups, not to mention if Pep Guardiola adds Erling Haaland to his star-studded squad.

Of course, those external factors are out of Liverpool and Salah’s control, but when looking internally, the picture is again slightly worrying for Salah. Of the players who recently took to the field against Man City in the league at The Etihad, eight of the fourteen were aged 29 or older. Whilst Klopp has already begun the process of rebuilding his attack with the acquisition of Luis Diaz, who looks very capable, there is no guarantee yet that he will be able to reach the heights needed to deliver trophies. What’s more, there is also the much talked about prospect of dressing room divides cropping up should Salah be given the big paycheck he deserves. Teammates such as Sadio Mané and Virgil Van Dijk may come looking for pay increases of their own and given Liverpool’s stringent structure, you would imagine that something would have to give. That much talked about squad harmony may finally crack.

Other reasons for leaving Liverpool are easy to come by. For one, possible destinations such as Paris Saint-Germain and Real Madrid would undoubtedly offer Salah far more money. If you park the finances for a minute, there is still so much for these clubs to tempt Salah with. For starters, PSG will almost certainly guarantee Salah a league title every year, on top of the chance to be a figurehead behind the club’s first ever Champions League success should he lead them to glory. The pace of Ligue 1 is not that of the Premier League, and so Salah could envisage prolonging his career in Paris for many years, whilst earning a fantastic living and teaming up with Lionel Messi for part of it.

In Spain, Salah could become the first Egyptian to ever play for Real Madrid and would be the missing piece in a world-class frontline of Karim Benzema and rising star Vinícius Júnior or potential superstar recruit Kylian Mbappé. The allure of Los Blancos still hangs over English clubs to this day; even more so should Liverpool not opt to over-extend their wage structure to accommodate their best player. Elsewhere, Barcelona are always in the market for free agents and given there’s both the prospect of Ousmane Dembélé leaving this summer and the fact that Pierre-Emerick Aubameyang is already 32 years of age, a space could very easily be afforded to Salah at the Nou Camp. He could be the catalyst for the Blaugrana’s return to former glories under Xavi.

Above all else, at Liverpool, Mo Salah has become one of the best players in the world but is yet to be treated like one. He is still viewed as a cog in the Klopp machine, a machine which includes his AFCON nemesis Sadio Mané and will presumably also feature a replacement for Salah in the very near future.

For Salah to truly become the global icon his talent deserves, and to transcend the sport in ways never seen before by a man from his country, he needs to leave England.

If Liverpool feel they must think twice before giving Salah what he deserves, then he should not have to think twice about moving on.