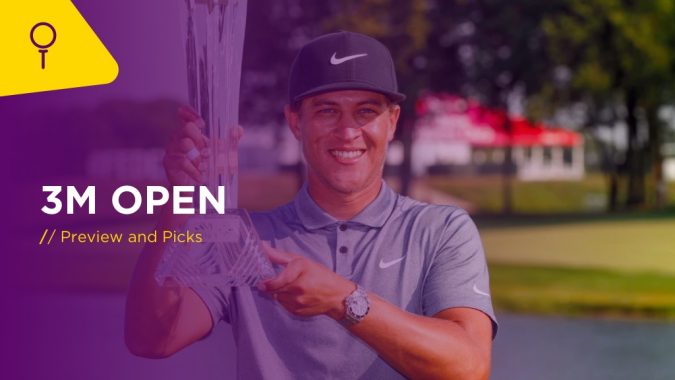 3M OPEN: After a magical week for Cam Smith, the sport of golf, and followers of this column, we crash back to reality with the PGA Tour’s 3M Open, an event that is beginning to carve out a good reputation amongst the players despite a difficult spot on the schedule. That’s partly due to the warm reception of the local fans– the Tour’s decision to host an event in Minnesota has been a smashing success in that regard– and partly due to the course, the Arnold Palmer-designed TPC Twin Cities, which has been roundly praised by the players and for its playability and strategic potential.

It’s not a hard course by Tour standards, with Cameron Champ’s 15-under 269 last year representing the highest winning score we’ve seen in this tournament’s brief existence, but TPC Twin Cities has already shown that it can be played in several different ways and conquered by several different styles, which is the hallmark of a well-designed course. We’ve seen bombers like Champ and Matthew Wolff hoist the trophy, but we also saw Michael Thompson, one of the shortest guys on Tour, win here in 2020, and that year there were very few “bombers” in the top-10. There is no plug-and-play formula for success here, but we do know that players must be sharp with the irons to attack the smallish, multi-tiered greens, and there are several holes where the thick bentgrass rough must be avoided at all costs, so we can expect to see the longer guys clubbing down to make sure they can find the fairway. While there are several lakes around the course that come into play on a few holes, there simply isn’t enough severity at TPC Twin Cities to trouble the world’s best players. Barring some crazy weather, this will be a birdie fest.

BETDAQ’s Win Market is crowded at the top, with Tony Finau (19.0) currently a narrow favorite over Hideki Matsuyama (21.0) and Sungjae Im (22.0). None of those guys has won a tournament in a while, however, so seeking value a bit further down the board is probably a good idea. With that in mind, here’s what I’m thinking this week:

Adam Hadwin (33.0)- Though he’s yet to win this season, Hadwin has been on a tear since mid-March, logging four top-10s and six top-25s in that span, including a T4 at the Valero Texas Open and a T7 in last month’s U.S. Open. Had he done that last year, he likely would’ve been playing at St. Andrews last week, but he stayed home and is therefore more rested and prepared than he might’ve been otherwise. Most importantly, he has a superb record at this event which includes a T6 last year and a 4th-place showing in 2019. Hadwin generally does his best work on bentgrass courses that prioritize accuracy with the irons, so it should come as no surprise that he devours TPC Twin Cities. He’s a blue-chip option this week and is well worth a bet at better than 30/1.

Emiliano Grillo (47.0)- It’s been a struggle for Grillo this season, as the young Argentinian has missed more cuts than he’s made and has found the top-10 just once in 25 starts. His unfortunate opening-round 78 at St. Andrews last week ended his Open early, but he did shoot 68 on Friday, and if you look a bit closer there are definite signs that Grillo is nearing top form again. The most obvious of those was his runner-up finish at the John Deere Classic just two weeks ago, when he posted 18-under over 4 rounds and looked refreshingly comfortable with the putter in his hands, but even before then there were signs, like his run of five consecutive made cuts that included solid performances at the Memorial (T32) and the RBC Canadian Open (T28). He now comes to a place where he’s enjoyed success in the past, finishing T3 here in 2020, and where the field and general feel of the course is similar to what he saw at the John Deere two weeks back. Grillo’s game is on the upswing, but his price is still juicy enough.

Austin Smotherman (122.0)- Due to the nature of the field this week there are plenty of options in the triple-digit range, but I was a bit surprised to see Smotherman trading at better than 120/1. This is a guy who is clearly starting to figure things out as we come down the stretch of his rookie season, making the cut in 7 of his last 9 starts and logging three top-25s in that span. Last week he finished T8 at the Barracuda Championship, his first top-10 on the Big Tour, and he’s now up to 134th in the FedEx Cup standings, putting him within shouting distance of a Playoff berth. He’s an excellent iron player who ranks 38th on Tour in strokes gained on approach, so he should have plenty of birdie opportunities at TPC Twin Cities this week, and his putting stats have been steadily improving. Don’t be surprised in Smotherman makes some noise this week– he’s certainly worth a bet at the current price.