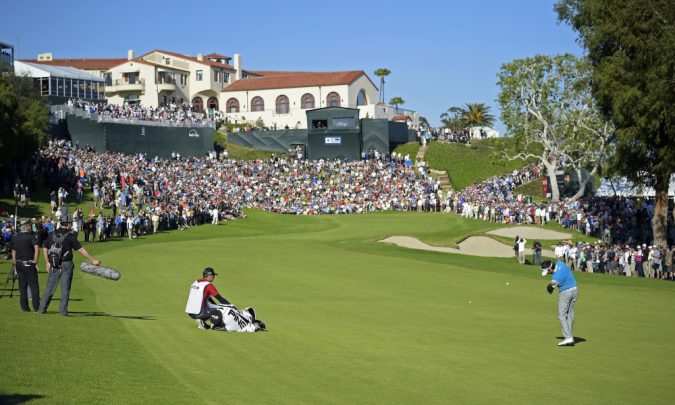 GENESIS INVITATIONAL: After a thrilling week in Scottsdale the PGA Tour moves on to the final event of the West Coast Swing, the Genesis Invitational, where the strongest field we’ve seen in 2022 will tee it up at one of the most beloved courses on the circuit, Riviera Country Club.

The Riv, as it is colloquially known, was built in 1926 and has been the site of three majors, a senior major, and the U.S. Amateur. It’s hosted this event 58 times and has changed very little over the years, with the last renovation occurring in 1992, when Ben Crenshaw and Bill Coore returned the bunkers to their original character and appearance. The bunkers and sticky kikuyu rough are the course’s primary defenses, as Riviera isn’t particularly long by modern standards and doesn’t have the severity in terms of water hazards and penalty areas that the players will see in the upcoming Florida Swing. That said, the tight fairways and subtly tricky green complexes make Riviera a tough nut to crack, and the scoring average as been over-par in this tournament in each of the past 12 years, with the winning score generally hovering in the 10-15 under range. It’s a true test of a player’s tee-to-green game– there’s no “faking it” around Riviera.

This event always attracts a quality field and this year is certainly no exception, as the top-10 players in the latest World Golf Rankings will all be in attendance. As you would expect, World No. 1 Jon Rahm heads BETDAQ’s Win Market at 8.7, with the red hot Patrick Cantlay right on his heels at 12.0. The fact that neither player has won this tournament yet is a bit surprising, and “yet” is the operative word there– you’d have to think it’s only a matter of time, and, who knows, that time could be now. Max Homa is the defending champ but this tournament has been won by major champions in 4 of the past 6 years, so the stars usually shine bright at Riviera. With that in mind, here’s what I’m thinking this week:

Jon Rahm (8.7)- Picking the tournament favorite is no fun when writing articles like these, but I’m not just doing this for fun– I like to get involved myself and have already placed a wager on Rahm this week. He’s clearly established himself as the world’s best player and now that he’s learned to control his emotions I really believe he’s on the verge of the type of run that we haven’t seen since a man named Eldrick was in his prime. He finished 10th in Phoenix last week, 3rd the Farmers Insurance Open, and runner-up in Kapalua, meaning he’s still looking for his first victory in 2022, and you know it won’t be long. Matter of fact it will probably happen this week, at Riviera, where he’s shot par or better in 10 of his past 12 competitive rounds (a real feat at the Riv) en route to finishes of T9, T17, and T5 over the last three years. Rahm is as close to a sure thing as this field has, and his current price won’t look so short after he goes low on Thursday/Friday.

Will Zalatoris (41.0)- Zalatoris ran out of steam towards the end of last season but the winter break obviously did him good, because his tee-to-green brilliance has fully returned in 2022. A second round 61 propelled him to a 6th place finish at The American Express, his first event of the new year, and he was even more dialed-in the following week at Torrey Pines, where he tied for the low score in regulation before losing in a playoff to Luke List. A positive COVID test has sidelined him these past couple of weeks, but he was reportedly asymptomatic and there’s no reason to suspect that the virus will have had any negative effects on his game (after Jon Rahm’s performance at The Memorial last year I’m sure there were golfers who considered intentionally infecting themselves!). With his precision ball-striking and pinpoint iron play, Zalatoris profiles as an ideal fit at Riviera, and he played well on debut last year, breaking 70 in three of the four rounds and finishing 15th. At a price like 41.0, he may be the best value on the board this week.

Charley Hoffman (102.0)- Hoffman made news for the wrong reasons last week after throwing a bit of a social media temper tantrum over an unlucky drop at TPC Scottsdale, going so far as to suggest that the PGA Tour’s rules processes are a big reason why players are considering bolting for the proposed Saudi tour. The episode may have dinged his reputation, but sometimes incidents like that can light a fire in a player and refocus their energy, and after a mostly listless season where he’s made 6 of 7 cuts but has yet to crack the top 10, maybe a little jolt is just what Hoffman needs. Though he’s had success all over the world, he generally does his best work on the West Coast and has played well in this tournament over the years, making the cut in 7 of his past 9 appearances and finishing 4th in 2017. A victory at Riviera would be a career high point for Hoffman, and it would be apropos for it to come directly after what is perhaps his career low point. At a triple digit price I believe Hoffman is worth a bet this week.