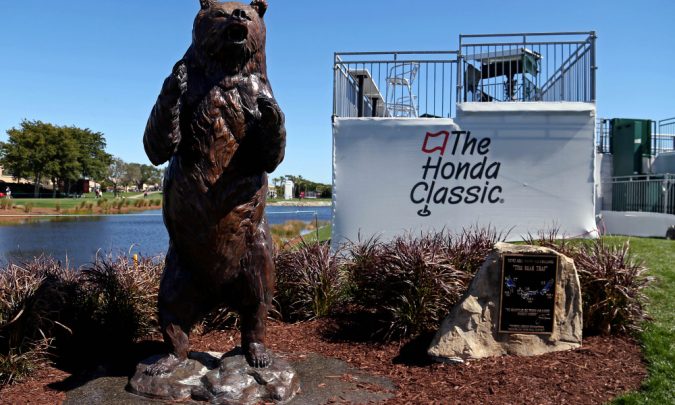 HONDA CLASSIC: The PGA Tour has wrapped up its business out West and now it’s on to the Sunshine State, where one of the most difficult venues on the schedule will kick off the 4-tournament Florida Swing.

Rabbi and historian Lionel Blue once said that the Jewish people were “just like everyone else, only more so”, and the same sort of thing could be said of the Champion Course at PGA National– it’s just like most Florida courses, only more so. With tight fairways, sticky Bermuda rough, and water that comes into play on 15 of 18 holes, the Champion Course is a proper test that can only be conquered by someone who displays both steely nerve and ball-striking brilliance. A par-70 that measures 7,125 yards, it’s not a bombers-only track, though length off the tee definitely helps in certain spots, and the greens aren’t unreasonably small, though they may start to feel that way if they firm up as the week progresses. But near-constant winds and a handful of utterly intimidating shots are enough to make scoring a real challenge, as the cut has been over-par in this tournament in each of the past 15 years and the eventual champion has reached double-digits under par only twice in the last six years.

The most famous stretch of holes on the course– the stretch where players hope for pars and dreams are often dramatically crushed– is known as the Bear Trap, and it consists of two treacherous water-laden par-3s, numbers 15 and 17, and the par-4 16th, a dogleg around water that forces players to take on the trouble with their approach shots. Since 2007 there have been over 1,600 balls deposited in the water on these three holes alone, with nearly 80% of the competitors in that time finding the drink at least once in their trips through the Bear Trap.

Matt Jones was able to survive the carnage last year and pick up his second PGA Tour victory, and if you like his chances to repeat he can currently be had at better than 50/1. The field this week isn’t particularly strong, as only three top-20 players are in attendance, but this tournament has produced some thrilling finishes over the years and the Bear Trap always makes for compelling viewing. Let’s hope one of these guys is in the mix on Sunday afternoon:

Keith Mitchell (36.0)- Towards the end of 2021 Mitchell broke out of a mini-slump with four straight made cuts and a pair of top-15s in October/November, and he’s carried the good form over to the new year, finding the top-15 in three of his four starts in 2022, including a T10 in Phoenix last time out. A tremendous ball-striker, he currently ranks 3rd on Tour in strokes gained off the tee and 15th in strokes gained tee-to-green, so he’s the sort of player who can handle the demanding nature of the Champion Course, and indeed he picked up his only PGA Tour victory at this tournament back in 2019. With the way he’s been playing lately, his course history, and the relative weakness of the field, Mitchell is a real threat this week and should be given serious consideration at a price like 36.0.

Brian Harman (54.0)- Harman has hit the ground running in 2022, cashing a check in all four of his starts and cashing rather large ones at The American Express, where he finished 3rd, and in Phoenix, where a final round 67 earned him a T14. He was scheduled to play at the Genesis last week but withdrew after his instructor and mentor Jack Lumpkin passed away at age 86. Oftentimes circumstances like this can inspire a player, and it wouldn’t surprise me at all if Harman were to have a special week as a sort of tribute to Lumpkin. He’s made nine starts in this event, so he certainly knows the course, and a pair of top-15s stand as proof that he can stare down the Bear Trap. At better than 50/1, Harman may be my favorite bet on the board this week.

Brendan Steele (148.0)- Steele has struggled mightily in recent weeks, missing the cut in each of his last four starts. That said, he’s broken par at least once in all four of those tournaments and he’s only six starts removed from a runner-up finish, so it’s not like he has the yips or has forgotten how to play– it’s just that the margin between success and failure on the PGA Tour can be razor thin. What Steele needs is a jolt of confidence, and there’s no better place for him to find it than this tournament, where he has five top-15 finishes in his last six appearances, including a T3 last year and a T4 in 2020, when he happened to be coming off back-to-back missed cuts. So we’ve seen it happen– Steele’s game has been magically cured at the Champion Course time and time again, and the results have only been getting better. He’s a no-brainer at nearly 150/1.