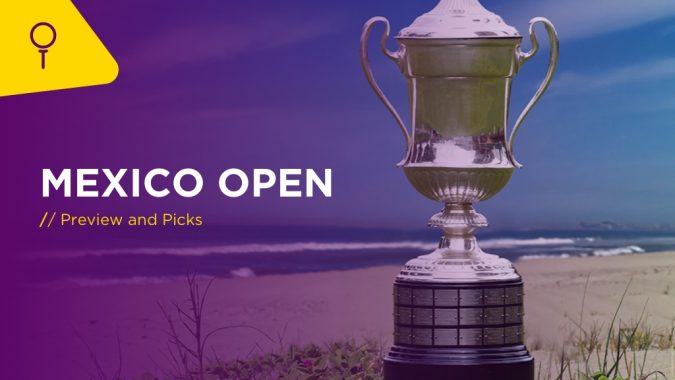 MEXICO OPEN: The national tournament of Mexico has been around in some form since the 1940s, with an illustrious list of champions that includes Roberto DeVicenzo, Lee Trevino, Billy Casper, Ben Crenshaw, and Stewart Cink. It’s had a strange history in that there have been stretches of years in which it wasn’t contested– 1985-1989 for example, and 1967-1969– but when the tournament has been held, a quality field generally shows up.

The spottiness, quirkiness, and maybe some of the charm is now part of the past though, because the Mexico Open is now an official PGA Tour event with a shiny new home– the Vidanta Vallarta resort, a luxurious beachfront hideaway with a championship golf course built in 2015 that just so happens to be designed by the man who currently occupies the top spot on the Tour’s enemy list, Greg Norman. Tipping out at 7,465 yards, the Norman Signature Course at Vidanta certainly isn’t short, and its coastal location means that winds and unpredictable weather could be a factor. Aside from that, we really don’t know much about the course– like many tropical venues the turf will be paspalum and water will come into play on several holes, but the fairways sure appear wide on the course flyover, and several of the greens are massive. It doesn’t seem to have the necessary ingredients to prevent a birdie barrage, so I’m expecting some super-low scores this week, with the winning number likely in the 20-25 under range.

Jon Rahm is the clear headliner this week and is currently trading at around 5.8 on the BETDAQ exchange, an awfully short price for a man who has finished outside the top-15 in four of his past five starts. I believe there’s some better value a bit further down the board, but all things considered– new course, place on the schedule, coastal paspalum after several Bermudagrass events, etc.– I think it’s safe to say that this event is trickier to handicap than most. That said, we’ve found a couple names who fit the profile and may be worth chancing. Here’s what I’m thinking:

Gary Woodland (28.0)- Though he’s flown a bit under the radar due to poor performances at The Players and the Masters, Woodland has been playing some great golf over the past couple of months, finding the top-25 in four of his last six starts, including a pair of top-5s and a T8 at the Valero Texas Open. He ranks in the top-40 on Tour in strokes gained tee-to-green, strokes gained on approach, and strokes gained putting, so he’s doing pretty much everything well, and his length off the tee will presumably give him an advantage at a beefy track like Vidanta. Given the run he’s been on, it will be a surprise if Woodland isn’t on the first page of the leaderboard come Sunday afternoon, making him well worth a bet at a price like 28.0.

Sebastian Munoz (48.0)- I expect some Latin American players to exceed expectations this week and the one I’m keeping a close eye on is the Colombian Munoz, who has logged a pair of top-5s this season and has made the cut in each of his last six starts. He’s been derailed by some poor final rounds but has still managed to post four finishes of 26th or better in this recent stretch, and he makes a lot of birdies, averaging 4.07 per round, so he’s equipped to go low in the likely event that this thing turns into a shootout. Colombians have fared well in this tournament historically, accounting for two victories since 2003, and Munoz is good enough to win anywhere. I’m happy to take a chance on him at nearly 50/1.

Chad Ramey (94.0)- The “horses for courses” department is kind of light this week for obvious reasons, but we have the next best thing– yes, it’s true that we’ve never seen Chad Ramey at Vidanta specifically, but we’ve sure seen what he’s capable of on paspalum-covered tropical courses, and that alone is enough to convince me to throw a bet his way this week. The 29-year old Mississippi native was on a stretch of 6 missed cuts in 7 starts when he showed up in Puerto Rico last month, but he took a liking to the island air and the paspalum greens and ended up finishing 5th. The following week he went back to the dreary old mainland for a MC at the Valspar, but then the next week he was back on island time in the DR, where he faced another paspalum-covered tropical course, Corales Puntacana. He responded by shooting 17-under over four rounds to earn his first PGA Tour victory. And now, four weeks later, with a T41-T59-MC record in the meantime, here we are again. Ramey is back on the paspalum. COUNT ME IN.