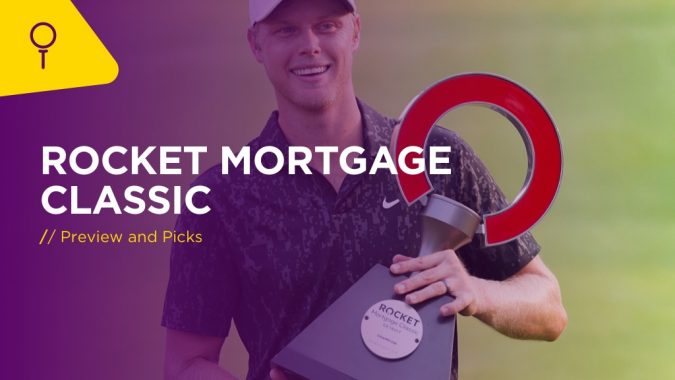 ROCKET MORTGAGE CLASSIC: The sprint to the FedEx Cup Playoffs continues this week in the Motor City, where a field predominantly comprised of mid-tier journeymen, Playoff bubble guys, and partial-status grinders will look to put an exclamation point on their season and position themselves to take advantage of the three-week cash grab that begins with next month’s Northern Trust.

This is the fourth consecutive year that the Donald Ross-designed Detroit Golf Club has played host to this event, and though the course looks like a charming little Ross gem, it doesn’t provide much in the way of resistance for the modern Tour player, meaning this tournament is always a pedal-to-the-metal birdie fest. Last year Cam Davis survived a playoff at 18-under, and that was the highest winning score we’ve seen here by five shots! Bryson DeChambeau finished at 23-under in 2020, and in 2019 Nate Lashley got all the way to minus-25. The cut last year fell at 5-under, so if you’re not taking it deep this week, you’re not playing the weekend.

The course tips out at 7,340 yards and features firm fairways and reachable par-5s, so length is no issue. Donald Ross layouts have a reputation for being fairly straightforward off the tee, but this one seems to be oddly devoid of the subtle trickiness around the greens that is generally considered to be Ross’s signature innovation. The lush bentgrass rough will give the players some pause, but two years ago we saw Bryson DeChambeau blast 340-yard bombs all over the yard and wedge it out of the rough for numerous birdies. There are lots of ways to skin a cat, but if you can keep it front of you at Detroit Golf Club and drop the occasional putt, the cat basically skins itself.

A course like this can produce some wild results because literally everyone in the field is capable of ripping off some really low numbers, and we’ve seen triple-digit longshots take home the trophy here twice in three years. Though the market this week is light on the big names, Patrick Cantlay (9.0) is here, as is Will Zalatoris (17.5) and last week’s winner Tony Finau (18.0) … but does the value lie a bit further down the board? Here’s what I’m thinking this week:

Maverick McNealy (25.0)- It’s taken McNealy longer than some thought to find his sea legs on the PGA Tour, and he’s still looking for his first career victory at age 26. He is starting to knock on the door with regularity, however, logging a runner-up and four top-10s this season, including two in his last four starts (T8 at the John Deere; T9 at the Barracuda). He’s an aggressive player who isn’t afraid to go low, ranking 2nd on Tour in eagles and 20th in birdie average, so this week’s setup should suit him. Most importantly, he seems to like Detroit Golf Club, finishing 8th in 2020 and T21 last year, and he’s never come into this event flashing the sort of form that we’ve seen out of him these past few weeks. It feels like McNealy is nearing a breakthrough, and everything is aligned perfectly this week– the course, the field, his game. He’s my pick to win.

Callum Tarren (48.0)- For most, professional golf is all about heating up at the right time– the old saying is that 90% of your money is made 10% of the time. Well, Tarren appears to be in the midst of a heater, and Detroit Golf Club is just the sort of course where a confident young player can keep his roll going. Tarren is long off the tee, averaging 310.9 yards per drive, but he’s not particularly straight, and we’ve seen that exact type of player win here (DeChambeau ’20) — if you bomb it up there far enough the rough is no big deal because you’ll be hitting wedges. We began seeing signs of life from Tarren’s game at the U.S. Open, but he really got going a couple of weeks later at the John Deere, finishing 6th, and since then he’s posted a T22 at the Barracude and a T7 in last week’s 3M Open. Both the John Deere and 3M were held on courses that are very similar stylistically to Detroit GC, so Tarren should be supremely confident and comfortable this week. He’s worth a bet at a price like 48.0.

William McGirt (112.0)- The man known as Dirt McGirt has had a tough go of it these past couple of years, battling injuries and poor play while clinging to partial status. Apparently he’s healthy again, however, and his game looked as sharp as ever at the Travelers last month, where he broke par all four days and finished 8th. We last saw him at the Barbasol two weeks ago and he came out firing there as well, posting 69-66 on Thu/Fri before fading over the weekend to finish T50. Point is, this is veteran who is starting to get dialed in, and with his professional life effectively on the line these next few weeks you know there’s no shortage of motivation. McGirt generally plays well on the easier tracks and his lack of length off the tee won’t hurt him at Detroit GC, where plenty of shorter players have thrived these past couple of years. This tournament has produced a couple of surprise longshot winners, and of the players who fit that bill this week, I like McGirt.