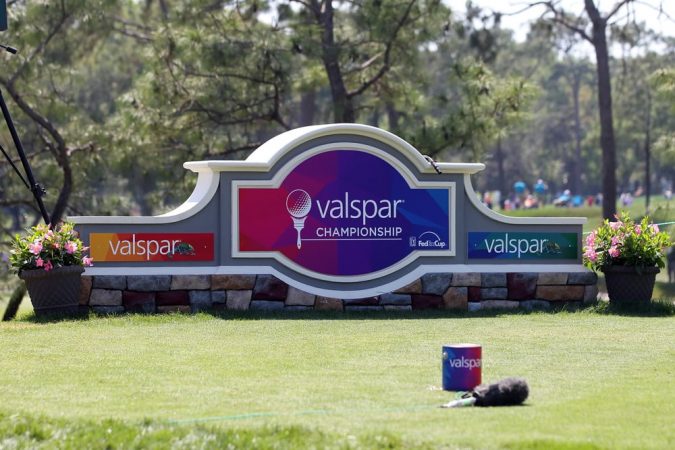 VALSPAR CHAMPIONSHIP: After a wet and wild week at The Players that culminated in the biggest moment of Cam Smith’s career, the PGA Tour’s traveling roadshow heads down I-75 to the Tampa area, where the venerable Innisbrook Resort will once again play host to “the most colorful tournament in the world”, the Valspar Championship. (Ed: Valspar is a paint company. There’s your explanation)

Despite being sandwiched between The Players and next week’s WGC-Match Play, this tournament has once again attracted a quality field, with 5 of the world’s top 10 and 15 of the world’s top 30 set to compete for a $7.8 million purse that probably feels smaller than it should after last week’s $20 million bonanza. Why do so many of the big guns show up to the Valspar? Well, scheduling undoubtedly has a lot to do with it… the Masters is less than a month away now, so it’s time to get the game razor sharp and many guys like to play their way into shape. But if the course were no good, the scheduling piece wouldn’t matter as much. Take it to the bank: anytime the world’s best players show up to an ordinary Tour event, a great golf course must be part of the equation. And based on what the players have said publicly these past few years, Innisbrook’s Copperhead Course is one of the best layouts on the schedule and an absolute hidden gem.

Originally designed by Larry Packard in the early 70s, the Copperhead Course had undergone several small tweaks prior to a major renovation in 1999 which transformed it from a traditional resort course to a 7,400-yard beast that can test every club in the bag. Narrow dog-legs, firm and fast greens with undulation uncommon for a Florida course, strategic bunkering, and water that comes into play on half the holes are a few of the challenges that must be dealt with this week, and the three most difficult holes on the course are numbers 16, 17, and 18, a closing stretch ominously known as the Snake Pit. Though defending champion Sam Burns reached 17-under last year, the winning score is normally much higher in this tournament, with Paul Casey’s 8-under and 10-under performances in his back-to-back victories in ’18 and ’19 more typical of what Copperhead usually produces. This is a week where you can’t get away with poor ball-striking… there’s no hiding at Copperhead.

The top of BETDAQ’s Win Market is full of blue bloods this week, as market leader Justin Thomas (10.5) is joined by the likes of Collin Morikawa (11.5), Viktor Hovland (12.5), and Dustin Johnson (17.5). This tournament has produced some longshot winners in the not-too-distant past, however, names like Adam Hadwin, John Senden, and Kevin Streelman, so don’t overlook the bottom-of-the-market types who have been playing well and have a history of success in this event. That said, here’s what I’m thinking this week:

Viktor Hovland (12.5)- I’ll admit to a bit of recency bias here: I watched Hovland play 16 holes of golf three days ago. He was paired with maybe the two best ball-strikers in the world in Jon Rahm and Patrick Cantlay, and I’m telling you right now he absolutely outclassed them tee-to-green. This guy is absolutely puring the ball right now, and he finished 9th last week despite looking like a 10-handicapper around the greens (anytime he could’ve possibly made bogey, he made one). I view the fact that Hovland nearly took over World No. 1 despite having a mediocre short game as a feature, not a bug. That’s how good he is tee-to-green, and his skillset is exactly what’s needed to conquer the demanding Copperhead Course. It should’ve surprised nobody, then, that Hovland finished T3 here last year in his tournament debut, and I won’t be the least bit surprised if he tops that performance this year and winds up with the trophy on Sunday afternoon. The price is short… with good reason.

Jason Kokrak (33.0)- While he hasn’t done anything spectacular since his victory in November’s Houston Open, Kokrak has been rock-solid in 2022, making the cut in all five of his starts and finishing 26th or better three times. He was under-par at The Players for most of the week until a final round 74 left him in a tie for 53rd, but he now gets a chance to wash that taste out of his mouth at one of his favorite stops on the schedule. No player this side of Paul Casey has been as consistently brilliant at Innisbrook as has Kokrak, who has finished T13, T2, and T8 in his last three appearances and hasn’t shot an over-par round since his third-round 72 in 2018, which is a remarkable stretch at a course as demanding as Copperhead. It’s a near certainty that he’ll strike the ball well enough to succeed this week and his putter should no longer be viewed as a weakness considering he ranks 20th on Tour in strokes gained putting this season. This is a great week to take a chance on the big Ohioan.

Adam Svensson (84.0)- In the years when this tournament has been won by someone outside the top 100, that player has generally fit a certain profile: good-to-great iron players who aren’t necessarily known for their putting, but have a history of success in Florida. Svensson is one guy who fits the mold this week, and he’s had a nice run lately, making the cut in 5 of his last 6 starts and finding the top-10 twice in that span, most recently with his T9 at the Honda Classic. The Honda was held at another demanding ball-striker’s course, PGA National’s Champion Course, and Svensson’s iron play shone through, as it does most weeks. He now ranks 13th on Tour in proximity to the hole after approach and 38th in GIR percentage, and that sort of brilliance with the irons should play quite nicely at Copperhead this week. It’s admittedly an outside the box name, but Svensson is someone who fits the champion’s mold for this tournament and should therefore be given careful consideration at better than 80/1.