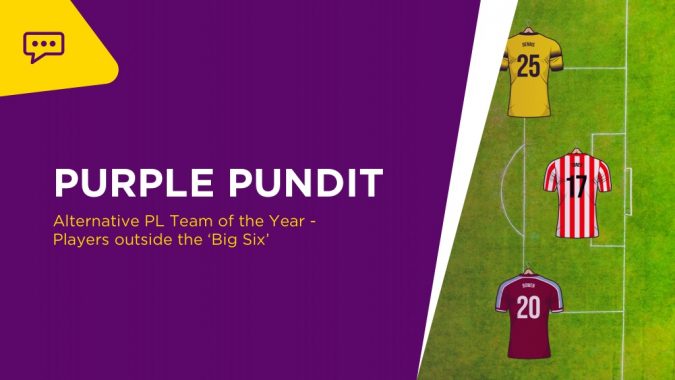 Regarded by many as the signing of the season, Jose Sá was a straightforward selection go start off this Alternative XI. Sá has notched up 11 clean sheets so far which is the best outside of the Big Six and only tied with Aston Villa’s Emiliano Martínez. The Portuguese stopper is one of only three goalkeepers with a Premier League assist this season whilst he ranks 2nd for most punches, 3rd for high claims, and fourth for most saves.

It’s been a fantastic debut season in the Premier League for Southampton’s 19-year-old right-back Tino Livramento. Before rupturing his cruciate ligament last month, the England U21 International had racked up 28 appearances, along with a goal and an assist. He currently ranks ahead of the likes of Tariq Lamptey and Vladimir Coufal for tackles won and has made more interceptions than Trent Alexander-Arnold. For these reasons and the fact he has impressed at such a young age, the former Chelsea Academy Player of the Year is a worthy entrant in this team.

Newcastle’s resurgence after the January transfer window has been largely down to their solid foundation at the back thanks to Dan Burn, who they brought in from Brighton on deadline day, despite the 29-year-old featuring for the Seagulls in 13 of 24 games. Since arriving on Tyneside, Burn has played every single minute of Premier League football and he’s been integral in keeping five clean sheets over those 13 games. What’s more impressive is the fact that if you exclude their heavy 5-1 loss away at Spurs, the Geordies have only conceded seven goals in twelve games since their former academy product returned home. Having won more aerial battles than Tyrone Mings and Max Kilman, as well as making more blocks than Ben Mee and Ezri Konsa, Burn is a fitting choice for our first pick at centre-half.

Partnering Dan Burn at the heart of defence is Crystal Palace’s Marc Guéhi. With 33 league appearances and two goals under his belt so far this season, the £18 million summer signing from Chelsea has proven to be fantastic value for money. The ball-playing defender is still only 21 years of age and amongst his fellow defenders in the league ranks #7 for completed passes and #8 for touches. That puts him ahead of Joel Matip and Ruben Dias respectively, as well as non Big Six centre-halves such as Mohammed Salisu and Joel Veltman. Guéhi has been crucial in Patrick Vieira’s new-look Palace side and his selection here is a no-brainer.

The last man to make up our back four is Spanish left-back Marc Cucurella, who has enjoyed a wonderful first season at the Amex Stadium. He’s made 32 league appearances to date and has played the seventh most minutes of all defenders, more than another strong contender for this spot, Tyreek Mitchell. Cucurella has completed more passes than Aaron Cresswell and ranks fifth for touches by defenders, ahead of both Cresswell and Mitchell, as well as Andy Robertson. The 23-year-old only has one assist on his cv this season but then again, Brighton have been far from prolific as they are the fifth lowest scorers in the league. Despite this, Cucurella has been able to impress going forward when deployed as a wing-back, whilst also filling in at centre-back in recent weeks.

The first of our three midfielders was a straightforward choice as Declan Rice has had the best season of his career for West Ham and came third in the recent FWA Footballer of the Year award. The Hammers could still finish in the top six but at the time of writing find themselves in seventh and so Rice qualifies for selection. Amongst all midfielders, the England international ranks second for appearances and fifth for minutes played, whilst he’s made the ninth most tackles, exceeding that of Ruben Neves and Jacob Ramsey. Excluding midfielders belonging to the Big Six, Rice is top of the pile for both touches and completed passes. An honourable mention must go to teammate Tomás Soucek, as the pair’s partnership has driven West Ham to their fine position in the table, but it’s Rice who get’s the nod for us.

Seen by some as a complete midfielder, Southampton’s James Ward-Prowse was one of the first names on this teamsheet after a stellar campaign. The Saints’ skipper has the second most appearances and minutes by any Premier League midfielder in 2021/22. The free-kick specialist has had a standout season, scoring the third most goals by a midfielder (9), four of which came from a trademark deadball scenario. That’s more goals than James Maddison and Pablo Fornals, whilst Ward-Prowse also has more goals and assists than Ruben Neves. The aforementioned Rice is the only midfielder outside the Big Six with more touches than JWP, whilst without the ball, he still has made more tackles this season than Romain Saiss and Emi Buendía.

The third piece in our midfield puzzle had to be Crystal Palace’s Conor Gallagher. Expectations for Gallagher were high after a promising spell at West Brom and the Chelsea loanee has excelled at Selhurst Park. So far, the 22-year-old has recorded eight league goals which is the fourth most of all midfielders and he’s only behind Ward-Prowse when focusing on players outside the Big Six. With 30 appearances and 2,592 minutes, Gallagher has been ever-present in Palace’s midfield and has three assists to add to his goal tally. Having made more passes this season than Phil Foden, James Maddison and Emi Buendía, Gallagher’s influence cannot be undersold and so he is totally deserving of a place in this side.

Our first attacker and second Hammer to feature in this XI is Jarrod Bowen who has had a fantastic season on the right flank for West Ham. The former Hull City winger has hardly missed a beat, making the second most appearances out of all forwards and delivering ten goals and eight assists. His double-digit goal haul has him ahead of Richarlison and Ismaila Sarr, meanwhile only Mo Salah has contributed more assists than the 25-year-old. He’s been the driving force behind West Ham’s push for a European spot in a team that lacks goalscorers at the top end of the field. It’s surely only a matter of time before Bowen is lining up for one of the so-called Big Six.

The man to lead the line in this Alternative XI is going to have be Brentford’s Ivan Toney. The Bees’ first season in the Premier League got off to a great start but Thomas Frank’s men wobbled in the middle part of the season, and it was Toney’s goals throughout his 30 appearances that eventually steadied the ship. The former Peterborough frontman has scored a dozen goals, the seventh most out of all attackers, putting him alongside some illustrious names. He’s also outscored Jamie Vardy, Ollie Watkins and Michail Antonio to name but a few. Another honourable mention must go out to Teemu Pukki, who despite Norwich’s struggles, has still managed to find the net ten times. But with more goals and assists (4), and considering it was his debut season in the league, Toney is our pick up top.

Our final selection may arguably be the most controversial, certainly in the eyes of Wilfried Zaha, as our choice for the left-wing berth is Watford’s Emmanuel Dennis. The Nigerian international has been a shining light during his 32 appearances for The Hornets in a season which is set to end in relegation. In spite of this, Dennis has found the back of the net on ten occasions, two less than Zaha, but the former has contributed six assists, five more than the Ivorian. Those stats give Dennis the 10th most goals and 4th most assists out of all attackers in the league, ranking him ahead of players such as Raphinha and Richarlison, and so he grabs the final spot in our team.