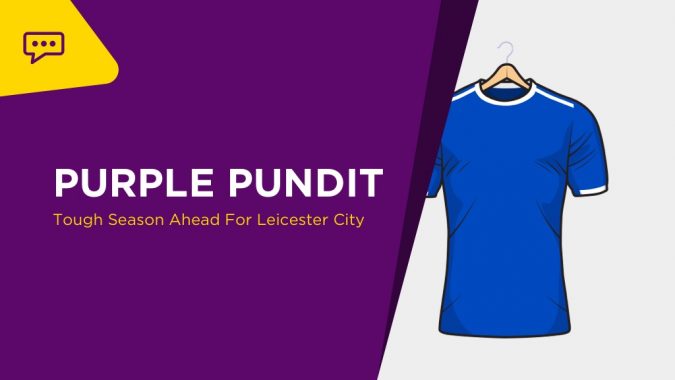 PURPLE PUNDIT: Reasons as to why Brendan Rodgers’ side could be in trouble this season.

Leicester City may currently be trading at 12.5 to finish in the Premier League’s Top Four on the Betdaq Betting Exchange, but there are plenty of reasons for their fans to be more concerned about the other end of the table.  As the opening weekend of the 22/23 season ticks ever closer, it’s becoming clear that backing The Foxes to be relegated at 13.0 may be a much more attractive trade, and here’s why.

We’re less than three weeks out from Leicester’s home opener against Brentford on August 7th and they are still yet to make any moves of significance in the transfer market. Dennis Praet has returned from his loan spell in Italy with Torino but nobody new has come through the door at the King Power Stadium. This is especially strange when you consider that by the end of July 2021 Patson Daka (£27m), Boubacar Soumaré (£18m), Ryan Bertrand (Free) and Ademola Lookman (Loan) had all been signed, sealed and delivered. This team which fell from fifth to eight in the league is in desperate need of refreshing yet the club have been slow to act. The suggestion from manager Brendan Rodgers has been that he must sell before he can buy. Midfielder Youri Tielemans looks the likeliest to leave, as his contract is running down, but with two of his biggest admirers, Manchester United and Arsenal, focusing on other targets in that position, both Leicester and Tielemans appear to be stuck in the mud for now.

According to Transfermarkt.co.uk, ten of Leicester’s current 26-man squad are out of contract in the summer of 2023. In addition to the aforementioned Tielemans, you have Kasper Schmeichel, Ryan Bertrand, Jonny Evans, Nampalys Mendy, Jamie Vardy, Daniel Amartey, Ayoze Pérez, Caglar Soyuncu, and Hamza Choudhury all awaiting quick and speedy resolutions. That’s a high degree of uncertainty surrounding some of the club’s most prominent players, ranging from club captain to top scorer. What’s more, five of the ten in question are aged 30 or over, meaning renewals may not be in the club hierarchy’s plans. If that is the case, you could have players more focused on their future than their football as the season progresses.

It feels as if from the very first moment that Brendan Rodgers began to succeed at Leicester City, he has been touted for jobs at so-called ‘bigger clubs’, so don’t be surprised to see that continue this season. Man City and Liverpool are set in their ways with Pep Guardiola and Jurgen Klopp, whilst Man United are entering the Erik ten Hag era, so any prospects there have vanished, but opportunities at other clubs could easily arise. Thomas Tuchel’s situation at Chelsea has been questioned ever since their ownership troubles began, and we are yet to see how patient new owner Todd Boehly will be should results dip. Rodgers of course has previous links to Stamford Bridge, having taken up the role of Head of Youth Academy during Jose Mourinho’s first tenure.

Arsenal have again spent big in the transfer market this summer, and in doing so heaped more pressure on Mikel Arteta’s long-term project. A poor start could see the Spaniard axed, with Rodgers and Patrick Vieira surely amongst the frontrunners to replace him. Lastly, and arguably more realistically, is the manager’s role at Newcastle United. Current boss Eddie Howe gained a number of plaudits in how he kept the Magpies up last season, but he has always felt like somewhat of a stopgap until a bigger name became available. Howe cannot compete with Rodgers in terms of Premier League experience, so it would be no surprise if the Saudi owners came to the Northern Irishman with an offer he couldn’t refuse should Howe struggle to start well.

Rodgers has been installed as the fifth favourite to be the next Premier League manager out the door, so don’t be surprised to see him head for pastures new should any of his colleagues at the above clubs be relieved of their duties.

Whilst a good start can often propel a team up the table and set them up for a season where they outperform expectations, the reverse can easily unfold should a few bad results come in the early exchanges. The latter is very much a possibility for Leicester this season. In their opening eight league games, the Foxes will face Arsenal, Chelsea, Man United and Spurs. Clubs may not want to engage in short-term thinking but for Leicester, there will surely be an element of making it to October still in one piece. What’s more, if the worst case scenario does come to pass and Leicester find themselves in a relegation battle until the bitter end, they won’t be too confident of coming out of it alive. Their final three fixtures are against Liverpool, Newcastle United and West Ham.

Bringing all of this together, it’s very easy to argue that Leicester City could be a strong candidate to go down this season. Failing to strengthen their squad until now is a grave cause for concern, whilst close to half of the squad are facing uncertain futures regarding their contractual situations. In addition, the club’s manager could be prized away by competitors in search of a fresh face, and given this December will mark three years into his most recent contract, it wouldn’t be t all surprising to see Rodgers take any potential suitors up on their offers.

Finally, Leicester have been dealt a poor hand in terms of their fixture list, not to mention having a World Cup half way through the season, which could see an already small squad hampered by both injuries and fatigue.

It’s shaping up to be a long and stressful season for The Foxes.