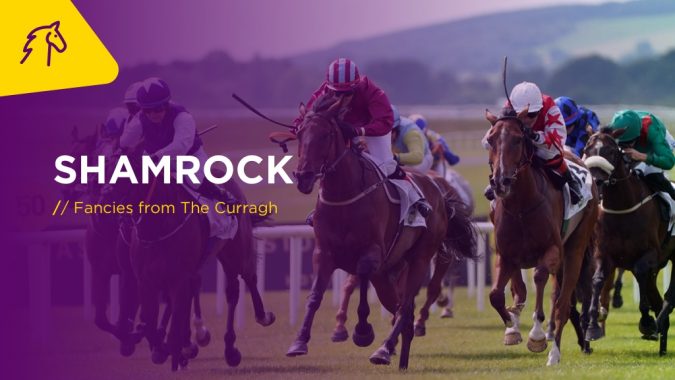 SHAMROCK AT THE CURRAGH: We preview the Irish Cambridgeshire card at The Curragh on Saturday.

The racing at The Curragh kicks off with a tricky maiden over a mile (1.20pm) with plenty having interesting profiles on paper. Joseph O’Brien’s Warrior Lion is entitled to improve on his debut outing at Naas where he was beaten by the well-regarded Denmark, trained by his father Aidan. And while the very well-bred Gulf Of Mexico looks interesting for Aidan, it’s his Cairo that gets the vote. The son of Galileo was a real eye-catcher on debut over six furlongs, when staying on really strongly and much more can be expected up in trip.

The Group 3 Irish EBF Stakes (1.55pm) can go to Paddy Twomey’s Shelton. The two-year-old got off the mark at the second time of asking last time at The Curragh and while she still looked green, she seemed to win with a bit in hand. The step up to a mile should suit and she’s marginally preferred to Caroline Street.

Next up it’s the Group 3 Round Tower Stakes (2.30pm) and it’s another Twomey runner we like the look of in the form of Treasure Trove. The daughter of Siyouni has been highly tried for a horse of her age having run seven times already but she comes into this after a taking performance in a Listed contest at York last week. That was over five furlongs but she won like a horse that would be fine over six and she should prove tough to beat if in the same form here. At a likely decent price, keep an eye out for Studio City. He was well below par last time at Goodwood but he’s better than that as a six-length victory at Navan the time before showed.

No real strong opinions in a tricky-looking six furlong handicap (3.05pm) though King Of Bavaria could be a cut above his six rivals. Albeit disappointing when sent off favourite for a Listed race at York last time, he might still be much better than a mark of 101 and could be far too good.

The Group 3 Snow Fairy Fillies Stakes (3.40pm) looks pretty competitive. Seisai gets the vote on the back of a very good performance in the Group 2 Kilboy Estate Stakes last time – a race which is working out very well. The winner, Lily Pond, ran well in a Grade 1 in the US subsequently, while the fourth, seventh and eighth have won, so the form looks very solid. Juncture is an obvious danger, but Joseph O’Brien’s challenger is preferred.

This year’s Irish Cambridgeshire (4.15pm) is a very tricky puzzle to solve as it usually is. There’s likely more to come from Ger Lyons’ Janoobi, but it’s hard to get away from Good Heavens. The gelding quickened away very impressively last time at Cork suggesting a mark of 98 might underestimate him. The majority of the fancied runners seem to be drawn high and history suggests that’s where you want to be, so he looks to hold strong claims on just his ninth career start.

The Apprentice Handicap (4.50pm) might be at the mercy of Sadiqaa. He is becoming a very well-handicapped horse who is a full nine pounds lower than his last winning mark. That came when trained by Clive Cox in Britain and while he hasn’t shown much since, he was much better on his first start for Denis Hogan at Gowran Park last time off this mark of 69.

The eight-race card concludes with a seven-furlong nursery handicap (5.25pm) and the one we like the look of is Hasten Slowly for Colin Keane and Noel Meade. She got off the mark last time at Leopardstown and there’s likely more to come now she runs in a handicap.