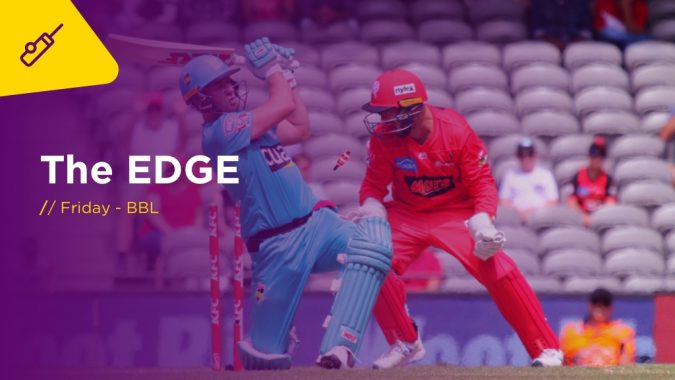 After 59 scheduled matches, we’re down to the Big Bash Playoffs! It’s been quite a dramatic season in the Big Bash this year with plenty of big swings in-running on BETDAQ Betting Exchange, however we arrive into the Playoffs really needing to finish the tournament well. Crowds have been down a lot this summer in Australia, and although you can point to The Ashes taking all the coverage, you get the feeling the Australian public is losing interest a little. The Big Bash have tinkered with the rules in recent years, and perhaps they have gone too far – maybe they need to just get back to normal T20 cricket, there was nothing wrong the way it was!

All that aside, The Ashes is now over and the focus turns to the Big Bash. We still have a couple of Covid19 issues and that definitely hasn’t helped this season either, but we do have some of the Australian stars returning. The pressure is obviously on here with the loser finished for the season – I have to say I felt Hobart would have finished higher than 5th looking at their level early in the season but they finished very badly. They conceded 273/2 in the final day against Melbourne Stars and that set tournament records! That loss means they finished one point behind Adelaide Strikers.

The Adelaide Strikers have finished the tournament in flying form and their recent games have been very impressive. They have beaten the top two sides in the league in their recent games, winning by six wickets against Perth Scorchers and eight wickets against Sydney Sixers. They are the form side, and it’s hard to see Hobart bouncing back so quickly after that terrible loss to Melbourne Stars.

We had to wait to get the Playoff schedule from the Big Bash, but we start at the MCG. We had a double header here on the final game of the Group stage, with Melbourne Stars setting records against Hobart Hurricanes. They scored 273/2 but Glenn Maxwell played an incredible innings – in the other game Melbourne Renegades failed to chase down 170/8 losing by one run. Scoring has been in general here in recent games, but I wouldn’t get carried away with that 273/2. Usually we have had scores in the 150 range and batting first has looked a little tougher before the final day. I’d keep an open mind on conditions.

There’s a lot that points to an Adelaide win here and I strongly fancy them to win at 1.8. It’s going to be hard for Hobart Hurricanes to bounce back from that performance against Melbourne Stars, especially with their bowlers having to play at the same ground. The Hurricanes also could only managed 139/6 batting here in early January. Both sides beat each other when they had home advantage, but the way Adelaide Strikers finished the Group stage is very positive. They have all the confidence and momentum heading into this game.

This is a very interesting game from an in-running trading point of view. There’s plenty of angles to look at here – I know the side batting first won the two games here on the final Group day but bowling first has provided a little edge here throughout the season in my opinion. We could easily see the market get carried away on the team batting first after that record breaking score, but I’d fancy the side who bowls first. If that was Adelaide Strikers I would increase stakes, and I would be a little worried if it was Hobart Hurricanes after they went around the park – perhaps in that case it’s a no bet. The Strikers have been in excellent form with the bat, especially their top order, and I’d be very keen to support them for a quick trade when they start batting.