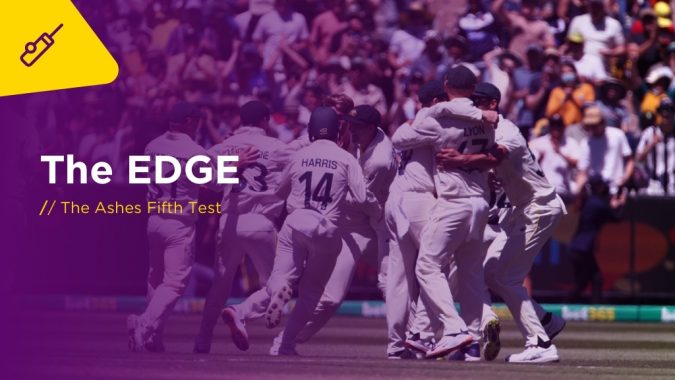 THE ASHES FIFTH TEST: Our cricket tipster The Edge previews The Ashes Fifth Test between AUSTRALIA v ENGLAND including a recommended BETDAQ bet for the final Test.

A battered and weary England arrive in Hobart for the 5th Test, probably counting down the days until they can get home. They lost the Ashes in 12 days over the first three Tests, but to their credit they battled so hard for that draw in the 4th Test. At least that saves the series whitewash, but they still had to cling on nine wickets down in the final over on day five. Despite that nerve jangling draw, you have to admire England for not rolling over to this Australian side. It would have been easy to just throw in the towel but they really dug in and that shown great pride.

The reality for this England side is they just aren’t on the same level as Australia at the moment. Given the long history of the Ashes, one side is always stronger than the other and this time around England are just going through a very rough patch. Despite the obvious gulf in class between the sides, it’s still been an excellent series for trading on BETDAQ Betting Exchange. The draw ended up going very short on Day 1 at the SCG, but Australia still traded odds on when England were losing wickets on the final day.

With this being another Day/Night Test, England are bound to be on top at times and we should have another good Test for trading. It’s hard to see England actually winning however, I just don’t see them staying on top for long enough to win. The draw price is always going to hang around, but the weather was much better than the forecast in Sydney and you would expect Australia to finish the series on a high. England will lose Buttler for this Test through injury, and Australia are firing on all cylinders at the moment.

Cricket Australia have opted to “make history, not money” as Hobart hosts its first ever Ashes Test match. It’s also the first time we’ve had a Test match in Tasmania since 2016 – and it’s the first Day/Night Test here. Ironically, when South Africa met Australia in 2016 they were worried about actually having a Day/Night Test in Adelaide – how times have changed since then! Cricket has moved on a lot since 2016, but the last two Tests here have been very one sided affairs. South Africa bowled Australia out for 85 here to win by an innings and 80 runs, and then in 2015 Australia beat West Indies by an innings and 212 runs after scoring 583/4. It’s actually hard to know what type of wicket we will get here because of the gap in play, and I would go into it with an open mind. It’s very hard to judge it based on the Big Bash T20’s here, but the wicket generally plays well. Overhead conditions and the Day/Night effect should play a big part though.

England had a fantastic chance to get a draw and avoid a series whitewash at the SCG given the weather forecast, and in the end they were hanging on nine wickets down in the final over. It’s hard to see past Australia here, and the draw price being so low means Australia offer great value at 1.7 in my opinion. We know by now that Australia are playing at a different level to England, and although England showed great heart in the 4th Test, they were also outclassed again and Australia’s bowlers can fire them to a 4-0 series win. I expect England to do well at times, especially with Root batting, but long-term Australia will come out on top.

As I have said above, just because Australia have been much the better side in this series, it doesn’t mean it hasn’t been good for trading. Once again we saw some big swings in-running in the 4th Test with Australia trading odds on during the final day. Much like the Adelaide Test which was over a Day/Night Test, you want to base your trades around the lights coming on here and batting getting tricky. Australia won at Adelaide quite easily, but Root and Malan put a decent partnership together for Australia to trade odds against. I would expect batting to be tricky early in the first innings, but then get a little easier until the lights come on. I would suggest bowling first, although it has been years since we saw Test cricket here.

The England batting line-up really dug in for the draw, but the Australian bowlers still kept them to 294 and 270/9 in good batting conditions. It’s hard to see England putting up a big enough score to warrant supporting them while batting long-term, and it will just be a case of picking momentum spots to get in and out quickly while they bat. Australia look full of confidence with the bat and ball, and I would spend most of the Test looking for ways to support them in the market rather than be against them.