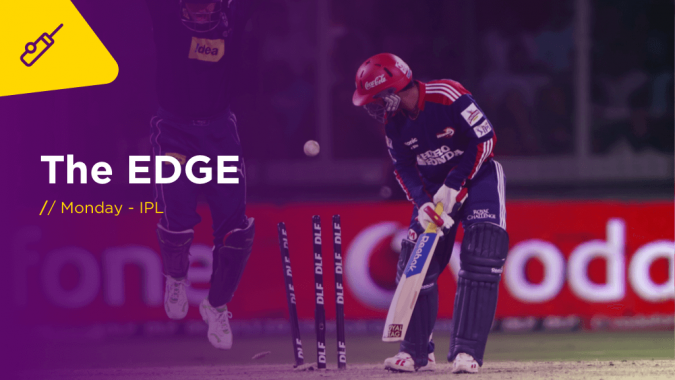 The Indian Premier League continues on Monday as the two new teams meet in the Wankhede in Mumbai. When CSK were banned for match fixing, we had a team called Gujarat Lions in 2016 and 2017. It was a very odd situation to be honest and the team disappeared when CSK came back! Hopefully this time they last longer and a ten team IPL is a success! We can’t complain about the amount of trading opportunities on BETDAQ Betting Exchange anyway!

Everyone will be going into this fixture a little blind given these are two completely new sides. It actually works out well that they play each other as we can keep stakes small here and get an idea about both sides. Gujarat Titans have some familiar faces in their line-up with David Miller, Hardik Pandya, Mohammed Shami, Rashid Khan and Shubman Gill to name a few. It seems to me that their bowling will be better than their batting. While Lucknow Super Giants have the likes of Quinton de Kock, Jason Holder, KL Rahul and Marcus Stoninis. You could argue that neither side got an absolutely blockbuster star, but then again most of the big stars are always kept by their teams and don’t go to auction.

I’m looking forward to seeing how the two new teams perform and getting an idea about what to expect as we go forward. A lot depends on batting conditions here, I think Lucknow Super Giants have the better batting but their bowling looks a little weak. If it’s easy to bat, you’d want to be on Gujarat Titans as there will be less pressure on their batting which looks weaker than their bowling.

This is the second game here, and although we would have saw conditions in the opening game it’s always wise to look back to the average scores here. Batting is generally very good at the Wankhede with the average score 177 here from ten games last season before the tournament was postponed due to Covid19. In 2019 it was 176 and in 2018 it was 171 so we’re looking at quite consistent scoring. I would always favour the batting side here, the one thing you just have to look out for is when we get a real spinning pitch here and it’s impossible to play. If that’s the case though you will know very early, and it’s usually a tired wicket.

Given we have two completely new teams here, it’s wise to keep stakes to a minimum. I’m expecting very good batting conditions here, so I feel Gujarat have the edge because they have the better bowling. No matter how good the wicket is, you still have the likes of Rashid Khan on your side which is very good. Neither side stand out to me, and to be honest I don’t see either side being a massive factor in the Playoffs. We’ve a long season ahead though! For today however, it’s Gujarat Lions for me and it’s no surprise that we have a very even market.

Although we have two new teams here, we know conditions well at the Wankhede. I’m going to be keeping stakes very small here, but I wouldn’t mind being on either side when batting. It wouldn’t be a surprise to see a score like 180 chased down – although I do favour the Gujarat bowling so I will just reduce stakes even more when they are the bowling side, but I feel in general this will be a batters game. It’s nice to get a good look at the two new sides together, and I’m sure we’re going to have some minor surprises in the batting line-ups with who bats where, but I think if you keep the batting side, and then chasing side, on your side here you won’t go far wrong.