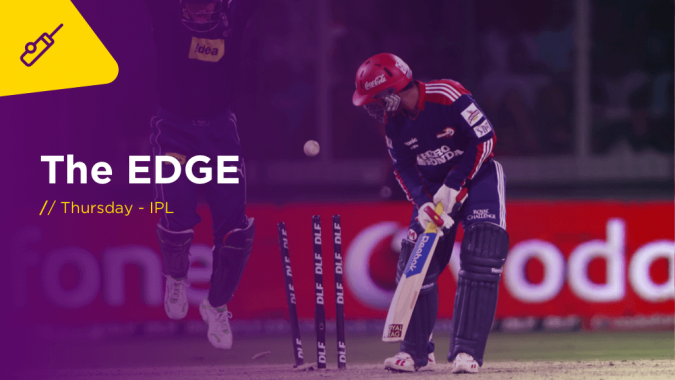 We have a fascinating match at the Indian Premier League on Thursday on BETDAQ Betting Exchange. Lucknow Super Giants take on the Chennai Super Kings with both sides hoping to bounce back from their losses in their opening games. CSK batter very poorly against KKR in their opening game of the tournament and we all know that they aren’t that bad. It’s a bad start though, and they need to right that wrong quickly. Although Lucknow lost their opening game, there were a lot of positives – they can improve, but can they improve enough to beat a top class side like CSK?

Lucknow had an absolutely mare to open their tournament. They found themselves 29/4 within the first five overs. Considering their two openers KL Rahul and Quinton de Kock are their two best players, they did very well to recover to 158/6 by the end of the innings. Of course with a start like that they were always going to be on the backfoot and they ended up losing. That being said, the Gujarat Titans needed some big hitting at the end and overall I wouldn’t be too disappointed with the Lucknow start.

CSK are heavy favourites going into this game but I feel the auction hasn’t been kind to them this year. They haven’t made the right moves and I feel that will show. I don’t see them challenging for the title this season and I can see them having major issues with their batting. I’m not a fan of their top three and although they have a strong middle order MS Dhoni is getting older now and he can’t carry the whole middle order himself. I feel we’ll have a pretty close game here, and Lucknow offer value.

We’re back at the Brabourne Stadium in Mumbai today and we should see the batters on top here. As I said in the first game here, this isn’t a “usual” IPL ground so we don’t have much data to go off. The first game saw very good batting conditions though with Mumbai Indians scoring 177/5 and Delhi Capitals chasing it in just 18.2 overs. Chasing it that quickly shows that 177 was under par, and we’re probably looking at the side batting first needing 200 here to put pressure on. That’s a daunting task.

We’re still so early in the tournament that it would be unwise to fully judge the sides, but I still feel CSK will struggle this year. Their side just doesn’t look as strong as it usually is to me and they are lacking a star batter towards the top of the order. They will miss Faf du Plessis and he showed he’s in great form too for the RCB already! Lucknow seem to be a reasonably solid side, they could go very well if the openers found form and gave that middle order good platforms when they come in to bat. I can see a pretty close game here to be honest, and Lucknow are the value at 2.2 or bigger. The market will love CSK here, but I feel they will be overrated this season.

I would definitely wait and see what conditions are like because it’s only the second game, but the first game looked very good for batting so I would expect good batting conditions again. Give it three overs to confirm it, but I would expect a par score to be around 190 based on the opening game here. That’s going to put pressure on their side batting first, and it might be a good play to get on the side bowling first. I’d be keen to take on the CSK openers. I do feel the market will overrate the CSK batting in general though, and it could pay to take them on. Dhoni started the tournament well, but I’d be keen to be against him for most of the tournament – he can’t do the things he used to and he can’t carry the middle order anymore. Even in his 50 in the first game, he was always fighting a losing battle.