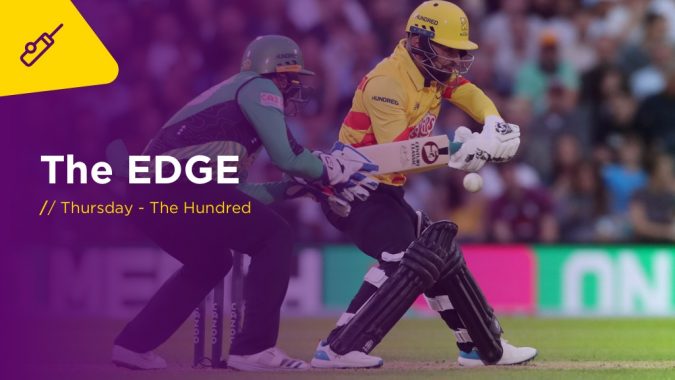 We’re back at The Oval at the earlier time of 3pm for The Hundred on Thursday as Oval Invincibles take on Northern Superchargers. This is an important game for both sides as they sit in mid-table with one win and one loss; as always the loser goes onto the backfoot but it is early days. So far The Hundred has been a big success with good crowds and high quality cricket, it’s also been good for trading on BETDAQ Betting Exchange. This looks like it will be a very close game on paper, and we should have another exciting game.

Northern Superchargers have a nice squad together, even without their star man Ben Stokes as he chose to sit out the tournament, but Oval Invincibles have definitely been the more impressive side. They lost their opening game, but having found themselves 12/4 so early, they actually did very well to get within three runs of the 171/6 from London Spirit. They then went to Cardiff and won impressively by a big margin; however it must be said at the moment Welsh Fire look like the side who will finish last. They just don’t have a very strong looking side and they have clearly be impacted by losing players to International duty or resting or International duty.

Oval Invincibles have a lot going for them here. They might run into issues with their England players later in the tournament, but for the moment they have a very strong batting and bowling line-up. Jason Roy opens, Rilee Rossouw comes into the tournament in superb form and then you have the Curran brothers and Narine heading the attack. That’s not even mentioning Sam Billings or Will Jacks who starred in their last win. Northern Superchargers have a nice looking squad too, but I am worried about their bowling and we should have good batting conditions here.

This is the second game at the Oval, with London Spirit scoring 171/6 and then Oval Invincibles coming up short by three runs in the chase. I would suggest given the very poor start from Oval Invincibles in the chase that the side batting first should be aiming higher to be honest. The Oval is generally a very fast scoring ground anyway, and I don’t see why they wouldn’t have a decent wicket here. The only thing to note is that we’re currently in a heatwave in the UK; so watch out for the wickets getting tired and we’ll start to see spin.

Although Oval Invincibles are clear favourites as 1.8, I still feel that prices offers enough value to back them. For me there is only one winner in this game – the Northern Superchargers have a nice batting line-up, but I believe the Oval Invincibles have better power hitters and that’s what you need at the Oval. Plus when you compare the bowling sides there is only one winner here and that’s the home side; additionally you have Narine in their side if we do get spinning conditions with the heatwave. I wouldn’t be surprised to see a high scoring game, and it will be the better bowling side who wins in my opinion.

With high scoring conditions expected, I would focus on looking for trades on the batting side in both innings. Perhaps give them a couple of balls to settle in, especially considering the way Oval Invincibles lost so many wickets to the new ball here in the last game, but then it should be a nice opportunity. While I believe the Oval Invincibles have the better bowling, it might pay to take on the Northern Superchargers bowling rather than support the Oval Invincibles bowling in high scoring conditions. When I look through the players from these sides, no one stands out as a player to take on at the moment.