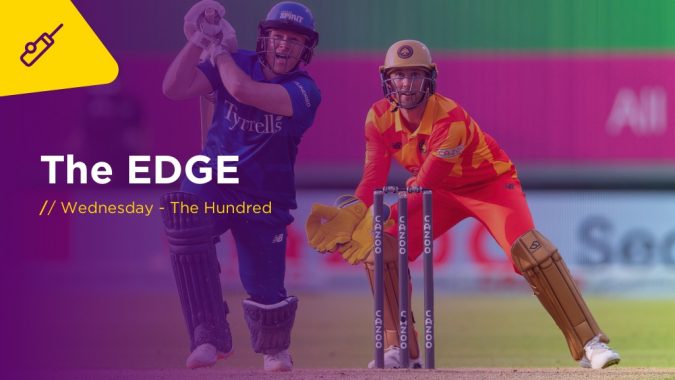 THE EDGE: Our cricket tipster The Edge previews Wednesday’s ‘The Hundred’ clash between Manchester Originals v Oval Invincibles with a recommended BETDAQ bet.

We wrap up the group stage of The Hundred on Wednesday evening, and we end it with Manchester Originals take on Oval Invincibles on BETDAQ Betting Exchange. It’s almost like the ECB planned this, but we have an absolutely massive game in the race for the playoffs to finish the group stage! With Trent Rockets beating Welsh Fire on Monday they put themselves in a fantastic position to top the group. Then because London Spirit played Birmingham Phoenix on Tuesday, that basically left a spot here for one of these sides to make a charge.

As I write this preview, it’s not clear what either side has to do with net run rate. At the moment, Manchester Originals sit above Oval Invincibles and there’s quite a difference between their net run rate. They are both on the same amount of points so it doesn’t really matter for this game, however London Spirit started the week on 10 points and Birmingham Phoenix on 8 points, so obviously these two sides will know where they stand after that game on Tuesday.

Both these sides have been pretty impressive, as their place in the table suggests, but Manchester Originals have a lot of momentum at the moment as they have put four wins together. They have been pretty big margins too, they have won by 43, 68, 23 and 79 runs. They have won their last two games without Jos Buttler too, which is obviously a big confidence boost for the side. For Oval Invincibles, they appeared to benefit from not having Jason Roy in the side who has had a terrible tournament. A fascinating game is ahead of us here though between two pretty evenly matched sides.

This will be the fourth Hundred game here at Old Trafford, and we have had three reasonably high scoring games here. The first inning scores have been 161/4 (chased), 189/3 (chased) and 149/9 (won). Apart from Welsh Fire who have been terrible with the bat and sit bottom of the table without a win at all, in general teams have done very well here. Given both these sides have impressed with the bat pretty much the whole tournament, I would expect a reasonably high scoring game again here. I wouldn’t view the Welsh Fire game as a good game to go off here, and I feel chasing might be the best option.

This is definitely a game to monitor the market when the other sides are playing because things could change about what each side needs. We’re in a situation here where “just winning” might not be enough, and we need to factor that into our betting. When I look at this game I can only see a very close game here. I know Manchester Originals have done very well and they have some very nice momentum going into this game, but I feel 2.34 is too big to turn down on Oval Invincibles – I fully expect the game to be closer than the odds suggest here and from a value point of view I’m happy to take a chance on Oval Invincibles.

The Edge Says:
One point win Oval Invincibles to beat Manchester Originals at 2.34 with Betdaq Exchange.

Given I expect a high scoring game here, I would definitely look for trades on both batting sides here. I can see the market moving towards the side who bats first because I do expect a high scoring game – I’m happy to ride the market momentum there, but I will also be switching at the innings break to the chasing side. I do feel we’ll see a little edge for the chasing side given the games here so far – I wouldn’t be too bothered by the Welsh Fire chase either. I expect a very close game here, and I wouldn’t be surprised to see both sides flip flop a few times in-running.