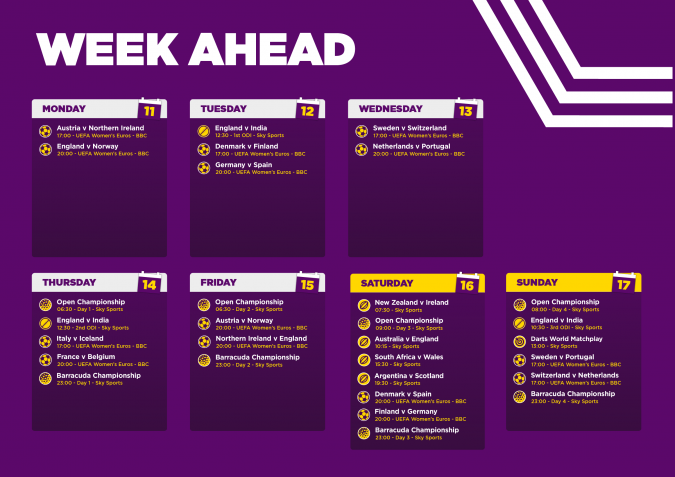 WEEK AHEAD: We head into another busy week of sport that will be dominated by the 150th Open Championship from St Andrews and the continuation of the UEFA Women’s Euros, while there are also some interesting rugby union fixtures later in the week.

Monday gets the week started on a high as we see Austria take on Northern Ireland (17:00, BBC), before England Women continue their Euro’s campaign against Norway (20:00, BBC).

On Tuesday, England start their ODI series with India before another evening of the Women’s Euros gets underway with Denmark taking on Finland, (17:00, BBC) before Germany play Spain at 20:00 (BBC) in a clash of the titans.

Wednesday cools off as the only major sport on TV is again the Women’s Euros. Sweden take on Switzerland at 17:00 (BBC), which is followed by another big match in Netherlands v Portugal (20:00).

Rory McIlroy and Matt Fitzpatrick will be in action on Thursday in the much anticipated and biggest golf tournament of the year, The Open, which gives us an early start as day one of the tournament is shown from 06:30 on Sky. England continue their ODI series with India (12:30, Sky), before another evening of the Women’s Euros gets going on the BBC – Italy take on Iceland at 17:00 before France play Belgium at 20:00. For the night owls and hardcore golf fans, the first day of the Barracuda Championship is shown on Sky at 23:00.

Day two of The Open Championship is again for the early risers at 06:30 (Sky) and will dominate most of the Friday for sports fans until the Women’s Euros gifts us another exciting evening. Austria play Norway and Northern Ireland play England in the final group stage match for the Lionesses (both kick off at 20:00 on the BBC). Again, the Barracuda Championship sees out the evening with day two going late into the night on Sky (23:00).

The weekend gets into gear with a busy Saturday which starts with round two of the rugby internationals, with New Zealand taking on Ireland at 07:30 on Sky. The Open Championship will be getting exciting as day three is shown on Sky from 09:00. Further rugby fixtures throughout the day are Australia v England in the second match in their Test series, as England aim to get a first win in months on the board (10:15, Sky) before South Africa play Wales (15:30) and Argentina take on Scotland (19:30). Denmark v Spain and Finland v Germany in the Women’s Euros are broadcasted on the BBC at 20:00 before the Barracuda Championship continues on Sky at 23:00.

Another full schedule of sport is rounded off with an interesting Sunday, which gets started with day four of The Open Championship (08:00, Sky). Will any of the Brits still be in the running for the trophy? England begin their third ODI match with India at 10:30 on Sky, before the Darts World Matchplay takes over until the evening (13:00, Sky). The penultimate day in the Women’s Euros group stages features Sweden v Portugal and Switzerland v Netherlands, both at 17:00 on the BBC, before the Barracuda Championship ends the week with the conclusion of the final round from 23:00 on Sky.