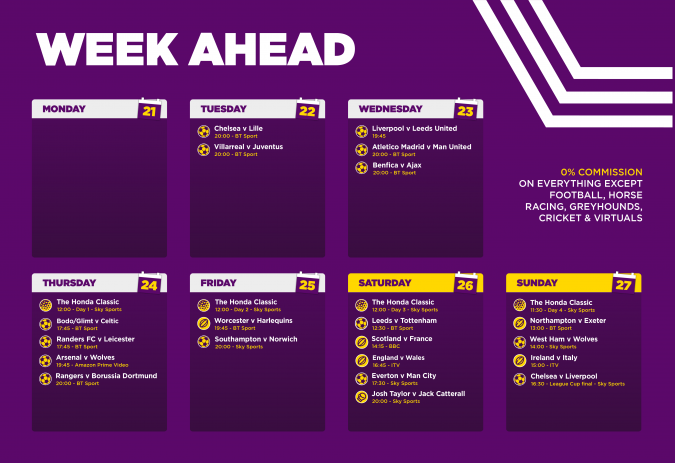 WEEK AHEAD: Midweek action from the Champions League and Premier League make for a cracking week of football, which is topped off with the League Cup Final on Sunday.

It’s a sedate beginning to the week without much live action before Tuesday evening when the next round of Champions League fixtures gets underway.

Reigning champions Chelsea begin the knockout stages at home to Lille and will be hopeful of taking an advantage back to France for their second leg. Villareal are at home to Juventus in the other tie of the evening. Both games are live on BT Sport from 20:00.

On Wednesday, Liverpool are in action in the Premier League as they welcome Leeds to Anfield (19:45). In the Champions League, Ralf Rangnick’s under fire Manchester United side head to Spain and face a tough looking task against Atletico Madrid (20:00, BT Sport). Benfica and Ajax clash in the other 20:00 kick-off.

Golf begins the day on Thursday, and, with all of the top 10 players in the world teeing up for the first round of The Honda Classic from Florida, it’s not an event to be missed. You can catch every ball from 12:00 on Sky Sports. In the evening, there’s more football, with the Europa League taking centre stage. Both Leicester and Celtic are in action in 17:45 (BT Sport) kick-offs to their Conference League second legs. Little separates Arsenal and Wolves in the Premier League, so their clash should be an entertaining affair (19:45, Amazon Prime Video). Fresh from a remarkable 4-2 victory in Germany, Rangers welcome Borussia Dortmund to Ibrox (20:00, BT Sport) as they bid to see out the tie and take their place in the Europa League last 16.

The Honda Classic is live from 12:00 on Sky Sport on Friday. Catch rugby from the Gallagher Premiership at 19:45 on BT Sport, as Worcester play Harlequins. In the Premier League it’s the turn of Southampton and Norwich at 20:00 (Sky Sports).

If you’re missing the sun then Florida might sound quite appealing with coverage of the PGA Tour beginning on Saturday (12:00, Sky Sports). The skies could be darkening for Leeds as the relegation threatened side face another difficult opponent when they play Tottenham in a 12:30 (BT Sport) kick-off. Round three of the Six Nations features more brilliant looking ties, beginning with Scotland and France from Murrayfield at 14:15 on the BBC. Then switch over to ITV and see England take on Wales. Can Frank Lampard’s Everton get one over league leaders Man City? Find out from 17:30 on Sky Sports. Later in the evening, boxing fans have a treat in store, with light-welterweight champion Josh Taylor and WBO challenger Jack Catterall going toe-to-toe from 20:00 on Sky Sports.

Sunday’s live coverage begins at 11:30 on Sky Sports, when the concluding round from The Honda Classic begins. Northampton are at home to Exeter at 13:00 (BT Sport), while West Ham host Wolves at 14:00 (Sky Sports). Ireland will look to get their Six Nations challenge back on track against Italy, in a 15:00 kick-off on ITV. Chelsea and Liverpool have won the League Cup 13 times between them, but only one will be adding to their tally when they contest the League Cup final from Wembley (16:30, Sky Sports) in a clash that should prove a fitting end to the week.