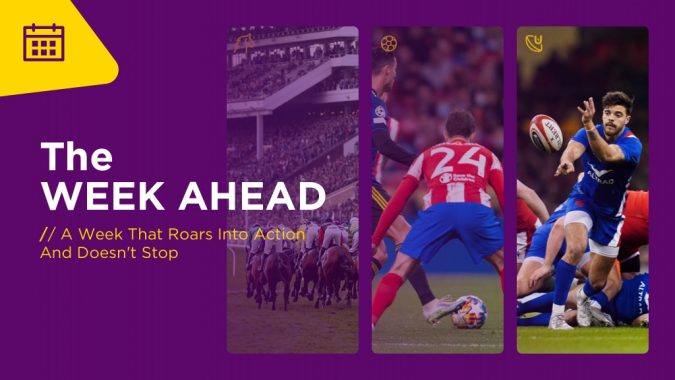 WEEK AHEAD: What a week of sport we have in store with Cheltenham,  the conclusion of the Six Nations, Champions League, the first Grand Prix of the season and much more besides.

Monday can be considered the warm-up for the week with an 20:00 (Sky Sports) fixture between Crystal Palace and Manchester City the only live action.

Tuesday is the day all horse racing fans have been counting down to – the beginning of the Cheltenham Festival. ITV Racing will broadcast the first five races of each day and on Tuesday we should be treated to a race for the ages in the Supreme, plus Honeysuckle making her bid for consecutive Champion Hurdles. Coverage begins at 12:50, with the first race off at 13:30.

In the evening there’s Champions League action with the final second legs of the last 16 being played. Manchester United’s tie with Atletico Madrid is finely balanced at 1-1, while Ajax and Benfica are also level, having played out a 2-2 draw last time. Both games are live from 20:00 on BT Sport.

Wednesday’s feature race at Cheltenham is the Champion Chase, where Energumene and Shishkin renew their rivalry. That begins at 15:30, but catch the coverage and other races beforehand from 12:50 on ITV. England begin their second Test against the West Indies at 13:00 on BT Sport. At 19:30 Brighton face Tottenham in the Premier League. Chelsea hold a comfortable two-goal lead over Lille in their Champions League tie, but Juventus and Villareal are locked together and it could be a nervy night for the Italians (both 20:00, BT Sport).

The action begins to ramp up on Thursday and the day begins with two golf tournaments, the Steyn City Championship on the DP World Tour (10:30, Sky Sports) and on the PGA Tour, the Valspar Championship (11:30, Sky Sports). Day two of the Test match continues from 13:30 on BT Sport. Day three of Cheltenham features the Ryanair Chase (14:50) and Stayers’ Hurdle (15:30), both live on ITV.

Rangers hold a commanding three-goal advantage over Red Star Belgrade and look set to book their place in the quarter final, while Leicester go into their second leg Europa Conference League tie with Rennes also with the advantage (both 17:45, BT Sport). At 19:00 the next leg of Premier League Darts flies into action, catch it all on Sky Sports. In Premier League football, Everton face a huge game against a resurgent Newcastle side in a 19:45 kick off, live on Amazon Prime Video. West Ham trail Sevilla in their Europa League tie, but it’s all still to play for at 1-0 (20:00, BT Sport).

On Friday the second rounds of the golf get underway at the same time on Sky Sports. The middle day of the Test match starts from 13:30 on BT Sport. The final day at Cheltenham is Gold Cup Day and in the big race itself (15:30, ITV), A Plus Tard and Rachael Blackmore are seeking to usurp Minella Indo after finishing runners up to that rival last year. In the evening, Newcastle Falcons face Leicester Tigers in the Premiership Rugby Cup (19:45, BT Sport). Wolves match against Leeds (20:00, BT Sport) rounds off the day’s coverage.

Saturday brings another momentous day of sport. Once again golf gets us started, with the third rounds from the Steyn City Championship (10:30, Sky Sports) and the Valspar Championship (12:00, Sky Sports). Aston Villa and Arsenal are the sides in action in the lunchtime (12:30) kick-off on BT Sport. Catch day four of England v West Indies from 13:30 on the same channel. The final week of the Six Nations see Wales begins against Italy in Cardiff (14:15, BBC), before two games that could decide the fate of the championship. Title chasing Ireland face Scotland at 16:45 on ITV, while England could potentially ruin France’s title party in their 20:00 kick-off, live on ITV. Between those fixtures the FA Cup continues, and giant-killers Middlesbrough have another potential target when Chelsea visit the Riverside Stadium at 17:45 (BBC1).

The other FA Cup quarter finals take place on Sunday, but before that the golf concludes in South Africa (from 10:30, Sky Sports) and Florida (from 12:00, Sky Sports). Crystal Palace and Everton are the first sides in FA Cup action at 12:30 on ITV. England and the West Indies fight out the final day of the second Test from 13:30 on BT Sport. The first instalment of the F1 season takes place at the Bahrain GP (15:00, Sky Sports). Manchester City and Southampton take each other on in the FA Cup (15:00, BBC1), there’s Tottenham v West Ham (16:30, Sky Sports) in the league before Nottingham Forest face their biggest cup challenge yet against the might of Liverpool (18:00, ITV).

In short, it’s a week of sport not to be missed.