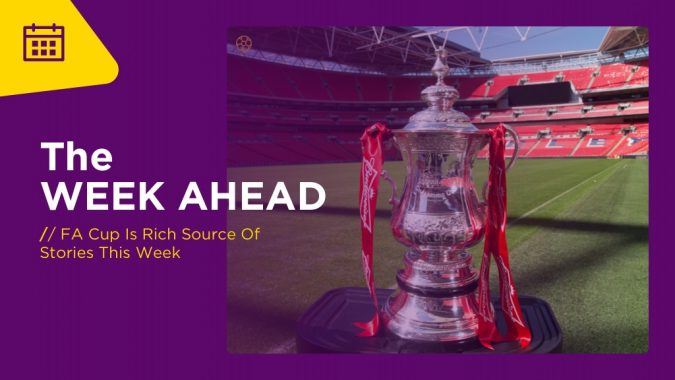 WEEK AHEAD: The magic of the FA Cup makes for a fantastic week of football which is rounded off with a crucial Manchester Derby in the Premier League.

It’s a feast of football this week and we begin on Monday evening with West Brom against Swansea in the Championship, live from 20:00 on Sky Sports.

On Tuesday the fifth round of the FA Cup gets underway and there looks to be plenty of intriguing ties, with Premier League sides taking on lower league opposition. Second bottom in the Championship, Peterborough United, have landed a glamour tie against Manchester City and they host the Premier League elite in a 19:15 kick-off on ITV. Crystal Palace are in action against Stoke (19:30, BBC Red Button), while fresh from knocking out Manchester United in the last round, Middlesbrough, will be hoping for further heroics against Tottenham (19:55, BBC 1). In the Premier League, Leicester City are away to Burnley in a 19:45 kick-off

There’s more FA Cup action on Wednesday evening and Chelsea will be hoping for a smoother passage to the next round against Luton (19:15, BBC 1), after being taken to extra-time by Plymouth Argyle last time. Then two all-Premier League clashes await with Southampton taking on West Ham at 19:30 (BBC Red Button) and Liverpool at home to Norwich in a 20:15 kick-off on ITV.

The DP World Tour travels to Kenya, with day one of play live from 10:00 on Thursday on Sky Sports. On the PGA Tour, the Arnold Palmer Invitational is always a big event and players tee it up for their first rounds from 15:00 (Sky Sports). The Premier League Darts travels to Exeter for Night 4, and with Peter Wright, Jonny Clayton and Gerwyn Price already claiming wins, it’s all to play for. Catch every dart from 19:00 on Sky Sports. Perhaps the story of the FA Cup so far is non-league Boreham Wood, and the fifth-tier, National League side, have the chance to pull off one of the greatest cup shocks ever when they face Everton on Thursday evening (20:15, ITV).

Round two in both golf tournaments gets us underway on Friday, with play beginning at the same time on Sky Sports. There’s rugby in the evening, when Harlequins face Newcastle at 19:45 on BT Sport. Boxing fans will have to wait up till 02:30 (Sky Sports) to see Jose Ramirez go toe-to-toe with Jose Pedraza.

On Saturday morning round three from the Kenya Open begins at the slightly earlier time of 09:30 on Sky Sports. Leicester face an under fire Leeds team in a lunchtime kick-off (12:30, BT Sport) in the Premier League. Then the competition heats up in Florida with round three of the Arnold Palmer Invitational (14:00, Sky Sports). There’s an intriguing top of the table clash in the Gallagher Premiership, as Saracens take on Leicester (15:00, BT Sport). At 17:30 on Sky Sports, Liverpool are at home to West Ham.

Sunday follows a similar schedule, with the concluding rounds from the Kenya Open and Arnold Palmer Invitational, beginning at 09:30 and 14:00 respectively on Sky Sports. Struggling Watford need to start picking up points, but face a tough looking task when Arsenal come calling (14:00, Sky Sports). Exeter and Sale provide the rugby entertainment for the afternoon from 15:00 on BT Sport. The Manchester Derby provides a fitting conclusion to the week at 16:30 on Sky Sports. Surprisingly the Red Devils have won three of their last five meetings with their city rivals and Ralf Rangnick will be hoping for more of the same.