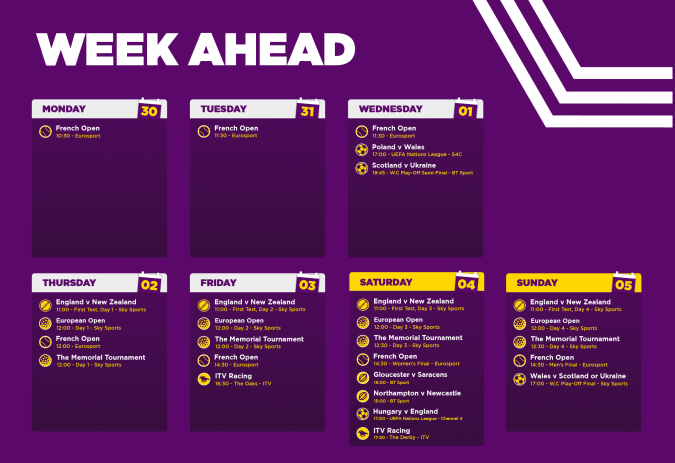 WEEK AHEAD: A place at this year’s World Cup is up for grabs for Wales, Scotland or Ukraine whilst it’s the final week of the French Open at Rolland Garros.

Roland Garros is the venue to open a fascinating week of sport on Monday, as the final week of the French Open begins. Catch the men’s singles quarter-finals from 10:30, live on Eurosport.

On Tuesday we’re on court from 11:30 (Eurosport), with the women’s singles quarter-finals.

Wednesday’s action begins from the French Open at the same time of 11:30 (Eurosport). In the evening there’s a big night of football, as Wales begin their Nations League campaign against Poland (17:00, S4C). The stakes for Scotland and Ukraine could not be higher as they face each other in their delayed World Cup play-off semi-final (Sky Sports, 19:45). Ukraine are sure to be supported from all corners of the world, but Steve Clarke’s Scotland will be keen to spoil the occasion as they look to book their first appearance at a World Cup since 1998. Wales await the winners in the play-off final on Sunday.

Test match cricket returns for the summer on Thursday, as Ben Stokes begins his England captaincy in the first of three Tests against New Zealand. Catch play from the first day at Lords from 11:00 on Sky Sports. Golf from the European Open gets underway at 12:00 on Sky Sports, while on the PGA Tour there’s action from The Memorial Tournament. Play also begins at 12:00 (Sky Sports). If tennis is more your thing, tune into the next day of the French Open from 12:00 on Eurosport.

Friday brings a similar schedule, with day two from Lords beginning at 11:00 (Sky Sports), followed by round two from both golf tournaments (both 12:00 Sky Sports). French Open coverage begins at the later time of 14:30 (Eurosport) with the men’s singles semi-finals. At 16:30 (ITV) the third classic of the British horse racing season takes place, with the Oaks from Epsom. Tune in earlier to ITV to see other races on the card.

The action comes thick and fast on Saturday, beginning with the third day of England’s Test match against New Zealand from 11:00 on Sky Sports. Players that have made the cut will be eyeing a valuable win at the European Open (12:00) and The Memorial Tournament (12:30, both Sky Sports). Several big names have won the later in recent years including, Patrick Cantlay in 2019 and 2021 and Jon Rahm in 2020. At 14:30 (Eurosport) there’s the women’s singles final from the French Open. There’s a double header in the Gallagher Premiership, with Gloucester taking on Saracens and Northampton against Newcastle (both 15:00, BT Sport). England begin in the Nations League away in Budapest, facing Hungary at 17:00 (Channel 4). At 17:30 (ITV), the Epsom Downs hosts the most famous flat race in the world, the Derby.

Watch the fourth day in the cricket on Sunday from 11:00 on Sky Sports. Play concludes in the golf from both the European Open and The Memorial Tournament, from 12:00 and 12:30 respectively on Sky Sports. Then the French Open tennis reaches its conclusion with the men’s final (14:30, Eurosport). Will it be a 14th French Open success for Rafael Nada, can Djokovic win to equal Nadal’s record of 21 Grand Slams, or will we see a new winner lift the famous trophy? There’s one final bit of drama in store to end a breathless week, as either Scotland or Ukraine face Wales in the World Cup play-off final with a place at Qatar 2022 at stake. It promises to provide high drama and is not to be missed at 17:00 on Sky Sports.