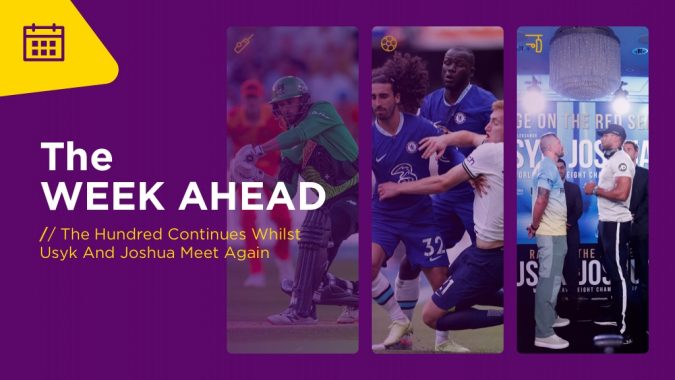 WEEK AHEAD: It’s a week of all sorts with Oleksandr Usyk putting his belts on the line in his rematch with Anthony Joshua, English football continues, and the Test cricket summer returns.

Monday gets the week underway with a bang as the Trent Rockets travel to Edgbaston to take on the Birmingham Phoenix in the Hundred (18:30, Sky Sports) before Liverpool and Crystal Palace continue their Premier League campaign at Anfield (20:00, Sky Sports). Can the Reds put early pressure on the top?

The Hundred continues on Tuesday with a matchup between Manchester Originals and Welsh Fire (18:30, Sky Sports) before QPR play Blackpool later in the evening (20:00, Sky Sports).

On Wednesday, England and South Africa collide in the first Test of the series at 11:00 on Sky Sports where all five days will be shown, before the Trent Rockets take on the Oval Invincibles in the Hundred at 19:00 (Sky Sports). Sheffield United play Sunderland at 20:00 (Sky Sports) to round off the evening.

Thursday sees the Test between England and South Africa continue on its second day before the Czech Masters and BMW Championship tee off at 12:00 and 15:00, respectively with all four days of action live on Sky. Defending champions Southern Brave take on Manchester Originals in the Hundred to ease us into Friday (19:00, Sky Sports).

Friday sees the Test between England and South Africa continue for the third day before the Czech Masters and BMW Championship open for their second day. Birmingham Phoenix take on the Northern Superchargers in the Hundred at 19:00 (Sky) before Millwall go to Norwich at 20:00 (Sky Sports). Can the Canaries climb the table and ignite an early promotion push?

The weekend gets into gear on Saturday as Wolves travel to the Tottenham Hotspur Stadium at 12:30 (BT Sport), and Hibernian take on Rangers in the Scottish Premiership at 12:30 (Sky Sports). Bournemouth and Arsenal have made good starts to the Premier League season and face off at the Vitality Stadium at 17:30 (Sky) before the weekend highlight gets underway; Anthony Joshua v Oleksandr Usyk 2 (18:00, Sky Sports. The evening ends with a trip to Trent Bridge in the Hundred as Trent Rockets take on London Spirit (19:00, Sky).

The first Test between England and South Africa comes to a close on Sunday morning where England fans will be hoping for more last day drama that’s been the story of the summer so far. The Czech Masters and BMW Championship get into their fourth day at 12:00 and 13:00, respectively (Sky Sports) and then Erling Haaland and co get back in action again as Manchester City take on Newcastle at 16:30 (Sky Sports). Northern Superchargers v Manchester Originals in the Hundred closes out the weekend at 19:00 on Sky Sports.