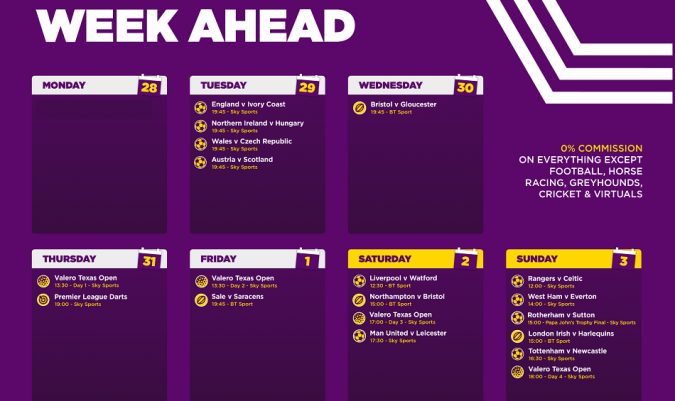 THE WEEK AHEAD: We look ahead to another cracking week of sporting action on BETDAQ. The Premier League is back this weekend and on Sunday all eyes will be on Scotland and RANGERS v CELTIC. Will the Old Firm clash prove to be the title decider?

On Tuesday evening all four home nations are in action in international friendlies. After a pulsating win over Austria in their World Cup play-off semi-final Wales will be hoping to keep up the momentum when they face Czech Republic in Cardiff. Gareth Southgate will have an opportunity to examine the depth of his squad against the Ivory Coast. Northern Ireland are also in action against Hungary. All games are live on Sky Sports from 19:45.

There’s rugby on Wednesday evening as Bristol line up against Gloucester in the Gallagher Premiership, live on BT Sport at 19:45.

The Valero Texas Open begins on Thursday, with round one getting underway at 13:30 on Sky Sports. Just a week out from the Masters at Augusta, players will be hoping to show their best form heading into the first Major of the season. From 19:00 on Sky Sports catch the next instalment of the Premier League Darts. The table has a close look to it with all but three players having won a night already.

Round two from Texas gets underway at 13:30 (Sky Sports) on Friday. Then there’s an interesting looking clash between second in the table Saracens and a resurgent Sale side at 19:45 (BT Sport).

The Premier League returns on Saturday and Liverpool welcome struggling Watford to Anfield for a 12:30 (BT Sport) kick-off. A victory would see the Reds leapfrog Manchester City at the top of the table, before their title rivals play Burnley later in the day. Northampton are at home against Bristol in the Gallagher Premiership (15:00, BT Sport). Play heads into the weekend in the Texas Open, with the action beginning at the later time of 17:00 on Sky Sports. The race for Champions League football is heating up and Manchester United will be looking for all three points against Leicester (17:30, Sky Sports) if they are to keep up the pressure on Arsenal and Tottenham.

Sunday gets underway with a huge clash between Old Firm rivals Celtic and Rangers. With only three points separating the sides in the Scottish Premiership this has the look of a title decider. Catch the action from Ibrox at 12:30 on Sky Sports. In the Premier League West Ham are also chasing Champions League football, while Everton continue their slide toward the relegation zone. Can the Toffees stage a revival? Find out at 14:00 on Sky Sports. At 15:00 (Sky Sports) there’s the final of the Papa John’s Trophy (EFL Trophy) from Wembley and a chance for League One Rotherham and last season’s National League Champions Sutton United to claim some silverware on the big stage. London Irish face Harlequins at 15:00 on BT Sport, then at 16:30 (Sky Sports) there’s more Premier League action with Tottenham against Newcastle. The conclusion of the Valero Texas Open brings the week to a close (from 18:00, Sky Sports) before eyes turn toward Augusta next week.