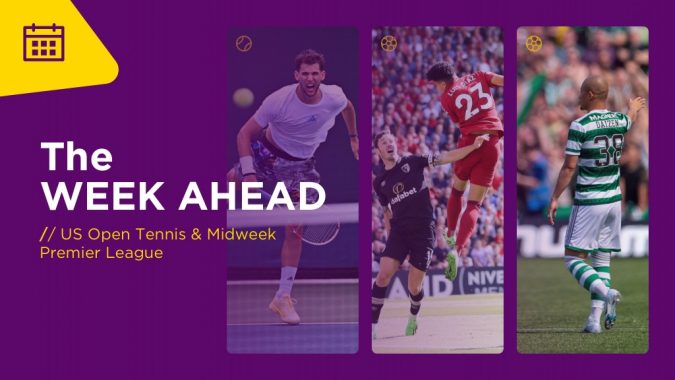 WEEK AHEAD: All eyes on New York for the US Open plus midweek Premier League action and The Hundred series reaches the closing stages.

The final Slam of the year gets underway in New York with Daniil Medvedev and Emma Raducanu out to defend their titles in the US Open.

In a week full of Premier League action, England and South Africa finish their second test on the fifth day of what has been a tight affair on Monday (11:00, Sky Sports), and Trent Rockets play Welsh Fire in The Hundred at 19:00 on Sky.

Tuesday doesn’t get started until the evening when London Spirit take on Birmingham Phoenix in The Hundred at 18:30 (Sky Sports). The packed football schedule then begins with a mid-table cracker between Fulham and Brighton which is live on BT alongside Crystal Palace v Brentford at 19:30. At 19:45, Chelsea’s visit to Southampton is also on BT before Leeds v Everton gets underway at 20:00. An epic clash in the Championship between Watford and Middlesbrough closes the evening at 20:00 on Sky Sports.

Northern Superchargers v Southern Brave in The Hundred then gets Wednesday going at 15:00 (Sky Sports) before the Oval Invincibles go to the Manchester Originals at 18:30 (Sky). Arsenal v Aston Villa is an exciting first fixture in another jam-packed evening of football (19:30, BT Sport) and the BT Sport showdowns continue with Manchester City v Nottingham Forest, Bournemouth v Wolves, West Ham v Tottenham and Liverpool v Newcastle all shown through the evening (19:30, 19:30, 19:45, 20:00). A big clash in the Championship, Blackpool v Blackburn is also on at 20:00 on Sky Sports.

Made in HimmerLand is Thursday’s first contribution to the week, with its first day of play teeing off at 12:00 on Sky. Leicester v Manchester United will make for an exciting evening with both teams in desperate need of a good result (20:00, BT Sport).

Friday sees the Made in HimmerLand tournament continue at 12:00 (Sky Sports), and the first of The Hundred eliminator rounds is played at 18:30 on Sky. An intriguing clash between two promotion-hunting teams in the Championship eases us into the evening with West Brom v Burnley. Who will take the edge?

Saturday begins with round three of the golf from the Made in Himmerland tournament at 12:30 (Sky Sports), while the Merseyside derby kicks off on BT Sport. Can Everton make another dent in Liverpool’s title hopes? The Old Firm derby is the highlight of the day at 12:30 (Celtic v Rangers, Scottish Premiership, Sky Sports), and then England’s Women are away to Austria in a World Cup qualifier at 16:30 on ITV. Aston Villa v Man City kicks off the evening on Sky Sports at 17:30, before the next The Hundred eliminator starts at 18:30 (Sky Sports).

Sunday sees another big day of sport as Reading, and Stoke City collide in the Championship at 12:00 (Sky Sports). Made in HimmerLand begins it’s concluding round (12:30, Sky Sports), and a London derby, Chelsea v West Ham will entertain us from 14:00 (Sky Sports). The long-awaited return of the F1 is upon us, and the Belgian Grand Prix will get the season restarted in style at 14:00 (Sky Sports). Will it be Red Bull, Ferrari or Mercedes? It’s anyone’s guess. A colossal fixture in Man United v Arsenal rounds off a great week of sport that sets us up for what will be a very appealing September (16:30, Sky Sports).