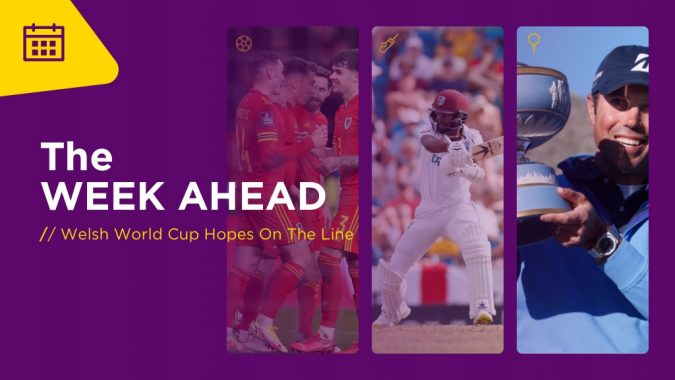 WEEK AHEAD: A quiet week of sport still features World Cup play-offs, an iconic PGA Tour event and the second round of this year’s F1 season.

After last week’s sporting feast we all deserve a bit of a break and a lull on Monday and Tuesday mean there’s chance to catch our breath.

On Wednesday the WCG-Dell Match Play begins from the Austin Country Club in Texas. Last year Billy Horschel won to claim his sixth title on the PGA Tour, beating Scottie Scheffler by two strokes. Players tee it up for their first rounds from 14:15 (Sky Sports).

Thursday begins with more golf, with DP World Tour event, the Commercial Bank Qatar Masters, beginning at 9:00 on Sky Sports. After a draw in the first Test, England will need to do more with the ball if they are to take the final Test of the series against the West Indies. Day one action begins at 13:00 on BT Sport. Catch the second round from the WCG-Dell Match Play beginning at 14:00 (Sky Sports). In the evening there’s the next leg of the Premier League Darts, where Michael van Gerwen bids to claim his third win in a row (19:00, Sky Sports).

At 19:45 (Sky Sports), Wales face Austria in their World Cup play-off semi-final and will be looking to set up what would be a huge final – with a World Cup spot up for grabs – against Scotland. Austria will be no pushover though and Gareth Bale and co will have to be on their game. The Scots semi-final against Ukraine has been postponed, so Steve Clarke’s side play Poland in a friendly, also kicking off at 19:45 on Sky Sports.

Round two of the Commercial Bank Qatar Masters begins at the same time of 09:00 on Friday on Sky Sports. Day two from Antigua gets underway at 13:30 on BT Sport. After the cut at the WGC-Dell Match Play the remaining players will be left fighting it out for a share of the $12 million prize fund. Round three begins at 14:00 with the action live on Sky Sports. In the evening there’s rugby as Gloucester face Worcester in the Gallagher Premiership (19:45, BT Sport).

Saturday follows a similar schedule, beginning with the third round of golf from Qatar (09:00, Sky Sports). England and the West Indies continue their Test match tussle from 13:30 on BT Sport and the next champion on the PGA Tour will be crowned, as the PGC-Dell Match Play concludes from 14:00 on Sky Sports. Second in the table Saracens should have too much firepower for Bristol Bears when they meet at 15:00 (BT Sport). Eyes turn to the SSE Arena Wembley for a huge bout between unbeaten British boxers Richard Riakporhe and Deion Jumah. The undercard begins from 19:30 on Sky Sports.

The Qatar Masters concludes from 09:00 (Sky Sports) on Sunday. There’s day four from the Test match at 14:30 on BT Sport, with the series potentially going down to the wire and a final day on Monday. Gallagher Premiership league leaders, Leicester Tigers, face a tough examination away at the Exeter Chiefs (15:00, BT Sport). This week’s action concludes with the second Grand Prix of the season from Saudi Arabia, at 17:00 on Sky Sports. Can Lewis Hamilton or Max Verstappen establish an early lead in the Drivers’ Championship with a win at the Saudi GP?