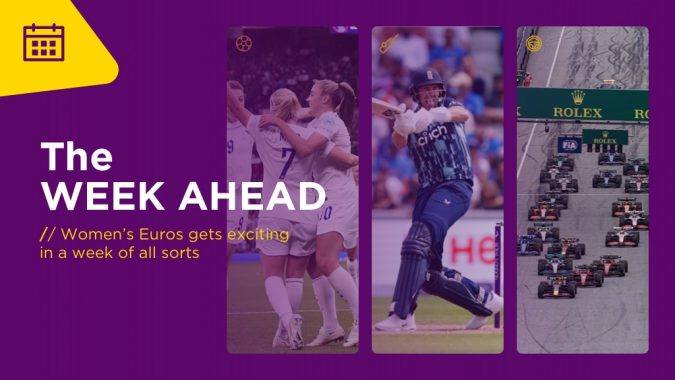 WEEK AHEAD: This week our screens will be graced with a variety of the world’s most popular sports including the best of football, golf, darts, and cycling.

We begin the week with an evening of darts live on Sky as the World Matchplay gets underway from 19:00 on Monday. Iceland play France, and Italy take on Belgium in their final Women’s Euros group stage matches, both of which will be broadcast on the BBC from 20:00.

Tuesday gets into gear with a visit to the French streets in the Tour de France (12:15, Eurosport) before the first ODI between England and South Africa begins at 12:30 (Sky). The Darts World Matchplay continues at 19:00 (Sky).

We head into the middle of the week on Wednesday with a continuation of the Tour de France which will be on most of the afternoon on Eurosport from 13:00, before the Darts World Matchplay continues into the evening. We are in for a very exciting night, as England play in their quarter-final of the Women’s Euros against Spain (20:00, BBC). Will we see more success for Sarina Wiegman’s side?

The Tour de France continues its domination of the afternoon as it again gets going at 13:15 (Eurosport) on Thursday before the golf tees off in the Cazoo Classic (19:00, Sky). The darts also continues in the World Matchplay from 20:00 (Sky), before Germany play their quarter-final in the Women’s Euros against Austria at 20:00 (BBC). There’s more golf with the 3M Open starting at 20:30 on Sky.

We have a warm welcome to the weekend with a busy Friday that will showcase the second ODI between England and South Africa (12:30, Sky), before the Tour de France is back on at 12:50 on Eurosport. The Cazoo Classic continues with its second day getting underway at 19:00 on Sky, while the Darts World Matchplay gets going for the fifth day running at 20:00 (Sky). Another Women’s Euros quarter-final kicks off at 20:00 on the BBC before the 3M Open’s second day begins at 20:30 on Sky.

Saturday is largely a repeat of Friday as the Tour de France starts at 12:45 on Eurosport. The Cazoo Classic heads into its third day at 19:00 on Sky and then there is another quarter-final in the Women’s Euros taking place on the BBC at 20:00. The darts continues at 21:00 on Sky while the 3M Open day three tees off at 20:00 (Sky).

The final day in what will have been a busy week begins with England taking on South Africa in their third ODI (10:30, Sky) while the Tour de France will make for an interesting lunchtime feast at 13:00 (Eurosport) on Sunday. If you prefer an engine to peddle power, the French Grand Prix might steal the show in the afternoon, especially with Lewis Hamilton looking like he’s getting back in the race for the Drivers’ Championship (14:00, Sky). The fourth rounds from the Cazoo Classic and 3M Open begin at 19:00 and 20:00 respectively, while the final of the Darts World Matchplay closes out the week in style at 21:00 (all live on Sky).